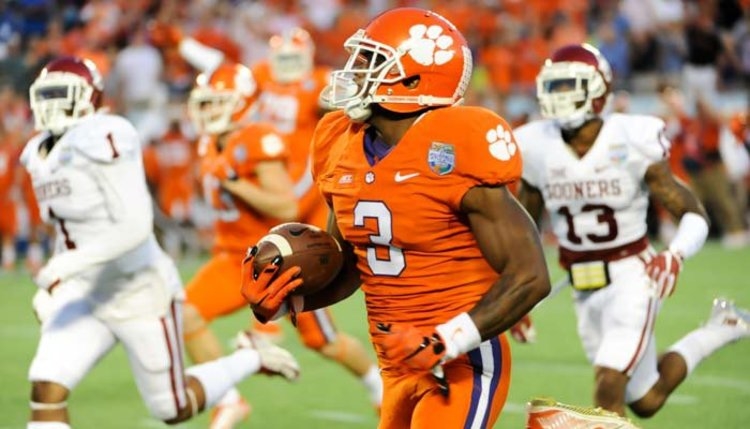 *Clemson had noteworthy plays on offense and defense to start the game. On defense, Clemson’s Grady Jarrett

Ben Boulware
So. Outside Linebacker
#10 5-11, 235
Anderson, SC
View Full Profile combined to stop Oklahoma running back Samaje Perine for a one-yard loss. It was the 123rd tackle for loss of the year and established a Clemson season record. Last year’s team had the previous best with 122.

Artavis Scott
Fr. Wide Receiver
#3 5-11, 190
Oldsmar, FL
View Full Profile for a 65-yard touchdown pass. It was the fifth time this year Clemson scored on its first drive of the game, the first time Clemson had done it on the first play of the game.

*The 65-yard touchdown pass from Cole Stoudt to Artavis Scott on the first play of the game was the first play call by Clemson co-offensive coordinator Tony Elliott, who was working from the press box.

The result of the play resembled the first play made by former Hall of Fame Coach Frank Howard, whose first call as Clemson head coach in 1940 against Presbyterian resulted in an 18-yard touchdown run by George Floyd.

*Clemson won the first quarter 17-0. It was the largest positive scoring margin for Clemson in a quarter in a bowl game since the third period of 2001 Humanitarian Bowl when Clemson outscored Louisiana Tech 28-0 in Boise, Idaho.

Adam Humphries
Sr. Wide Receiver
#13 5-11, 193
Spartanburg, SC
View Full Profile started at wide receiver for Clemson tonight. It was his 53rd career game, the most in school history at the wide receiver position.

Robert Smith
Sr. Safety
#27 5-11, 211
St. George, SC
View Full Profile all played in their 53rd games for Clemson tonight. They have never missed a game in their careers.

*Artavis Scott scored on a 65-yard touchdown pass from Cole Stoudt on the first play of the game. It was his fifth play of at least 50 yards this years.

Ammon Lakip
RS Jr. Kicker
#36 5-10, 200
Alpharetta, GA
View Full Profile made a 49 yard field goal in the second period. His longest as a Tiger and tied for the longest in Clemson bowl history. Obed Ariri had a 49-yarder against Pittsburgh in the 1977 Gator Bowl.