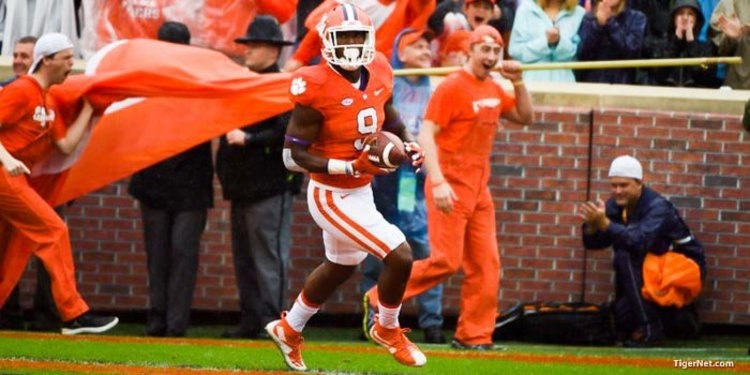 • The Tigers finished the game with 537 yards of offense, their highest offensive output of the season and most since 533 yards against Wofford in the 2015 season opener.

• Clemson has now scored on its first two offensive possessions in three of the five games in 2015.

Jadar Johnson
Jr. Defensive Back
#18 6-0, 203
Orangeburg, SC
View Full Profile blocked a punt at the six yard-line and the ball rolled out of the back of the endzone in the first quarter. It was Clemson’s first safety since Shaq Lawson

• Clemson also recorded a safety against Georgia Tech in 2012, when Spencer Shuey

• Clemson scored 19 points in the first quarter, its most since putting up 17 first-quarter points versus Oklahoma in the Russell Athletic Bowl on Dec. 29, 2014.

• Clemson’s 33 points in the first half were the second-most, first-half points for the Tigers this season (35 against Wofford on September 5).

• Georgia Tech scored its first touchdown of the game with 5:27 remaining in the first half. It was just the second first-half touchdown Clemson’s defense allowed in 2015.

• Nine different Tigers carried the ball, the highest number of players with a rush in 2015.

• Georgia Tech came into Saturday’s contest leading the ACC in scoring offense with 41.1 points per game. Clemson held the Yellow Jackets to 24 points, 17.1 points below their season average.

• Clemson tied the school record for consecutive victories at home with today’s win. This was Clemson’s 13th straight win at home, tying the record set between 1927-31 and 2011-13. That streak from 1927-31 took place at Riggs Field. Clemson will have a chance to break the record next week when Boston College comes to town.

• Clemson has beaten Georgia Tech three of the last four meetings, the first time that has happened since the Tigers won three in a row from 2001-03.

• Clemson has won 31 consecutive games against teams not ranked in either the AP or USA Today polls. The streak is 33 in a row against teams not ranked in the top 25 by only the AP poll. It is the second longest streak in the nation behind Alabama, who plays unranked Arkansas on Saturday night. All 31 of the wins have been by at least three points. That 31-game streak by at least three points over unranked teams is the longest streak of its kind in the nation.

• Clemson has won eight games in row over two seasons, the Tigers' longest winning streak since winning the first eight games of the 2011 season.

• Dabo Swinney is 43-15 against ACC teams (including ACC championship games), a 74.1 winning percentage. With today’s victory, he moved ahead of Lou Holtz (73.9) into sixth place on the all-time winning percentage list in ACC games.

• Swinney is tied for 11th in ACC history on conference victories with 43 (includes league championship games). He is tied for 11th with Tommy Bowden, Mack Brown, Ralph Friedgen and Jim Grobe.

Deshaun Watson
So. Quarterback
#4 6-2, 207
Gainesville, GA
View Full Profile is 9-1 as Clemson’s starting quarterback. His only loss as a starter took place at Georgia Tech last year, when he played the first 18 plays of the game before leaving with an injury.

• Wayne Gallman’s 66-yard touchdown run in the first quarter was the longest run of his career. His previous career-best was a 34-yard run at Georgia Tech in 2014.

• Gallman finished the day with 115 rushing yards. It is the third straight game with 100+ rushing yards. Gallman is the first Tiger with three straight 100+ yard games since Andre Ellington

• Gallman is the first player to have three straight games with 100+ rushing yards in the same season since Reggie Merriweather in 2005.

• Wayne Gallman tied a career-high with two touchdowns, both in the first quarter.

• Leggett set a career high in touchdown receptions with two when he caught an eight-yard pass from Deshaun Watson with four seconds left in the first half.

• Jadar Johnson blocked a punt in the first quarter, resulting in a safety. It was Johnson’s first blocked punt of his career.

• Cain finished the day with 96 receiving yards, a career high.

“I was disappointed with the effort today. We looked like a poorly coached team, and that starts with me. Clemson is a good football team. I’ll give them credit. They have some really good players. At least the kids came back and fought. It would have been easy to quit. But we’ve got a lot of freshmen and we have a ways to go. We really don’t have anybody we can rely on. It’s really frustrating.”

“We had so many negative yardage plays. For us, we have to establish the run, and we couldn’t do it. Some of that is not just the offensive line, some of it is the defensive backs. We just have to go back and work on it and try to get better. And we’ve played some pretty good football teams, and with a young team, that’s not a good combination. We’ve gone from being one of the best third-down teams to one of the worst. I’ve never experienced anything like this in my coaching career, being as inept as we are on offense."

On his team’s defense:

“He needs to play better. That interception to start the game was a poor decision. He’s a good player, but he’s far from doing everything right.”

On playing on the road this season:

“It seems whenever we go on the road, we just self destruct from the very start. This was just like the Duke game. We got behind 19-3 and we self-destructed.”

“Today was another great day in Death Valley. Hopefully, we’ll get some sun soon, but we’re becoming a pretty good rain team. Hats off to our team. We came out ready to play. I felt like we had a better week of practice than we did last week, and I expected our guys to play their best game.

"We had some huge plays. We set the tempo right out of the gate, again. All of our receivers had big plays, and guys like Wayne Gallmanand Zac Brooks ran hard for a lot of yards. This is now four out of five games that we’ve had 200+ yards rushing. We got everyone involved, and that’s when we’re at our best.

"Our defense played great. Seventy-one yards rushing against Georgia Tech is incredible. This is the first time since 2009 that they’ve been held to under 100 yards rushing. Jayron Kearse and Dorian O’Daniel were in the backfield all night.

"The special teams were great, too. We really just got good contributions from our whole team. What I’m most pleased with is that we put them away. The last couple of games, we’ve had double-digit fourth-quarter leads and let people back in the game. Tonight, we took control early and we never lost it.

On performance after Notre Dame:

“Today’s performance really speaks to the mentality of our team. Our guys truly have a ‘one-game season’ mentality. It’s all about what’s in front of you and not what’s behind you. It doesn’t matter who we play; we focus on how we play and how we prepare. We don’t vary how we prepare. I had a great sense all week that we were going to play our best game tonight. This is a focused football team. Our goal this week is to find a way to win the next one.”

On the defensive effort:

“We fought hard. We gave it everything we had, and it paid off for us in the end. That’s big for our defense. Holding them down like that to 71 yards is big for us. We feel good about ourselves, but we have to come in tomorrow and work hard to prepare for BC.”

On his big hits:

“It felt good. Those are tone-setting plays, and it feels good to amp up the crowd and spark my teammates. Getting those juices flowing, being out there with everybody, having fun and celebrating...can’t beat it.”

Analyzing his play on the field:

“I feel confident in my abilities. I felt as though I prepared well in reading the option and holding to my keys. I felt like I really got to show off my athletic ability, and that’s a testament to how I go into each week. I’m looking to fly around out there and make an impact."

On holding Georgia Tech's rushing attack to only 71 yards:

“Not until we got into the locker room and coach (Dabo) Swinney told us. That’s very special, to be part of history in that way. My name will be associated with that fact forever, or until that record is broken, and that’s pretty cool.”

On getting off to a hot start:

"We just have to deliver that first punch, and the offense came out swinging."

If throwing the ball was more emphasized this week:

On having four touchdowns over the last three games:

"I’m just minding my own business, and somehow the ball is finding me, so it is definitely a great feeling. I’m excited, and hopefully they keep using me more."

How scoring the touchdown felt:

"It felt great, felt like I had a chance to put the game away. I just took advantage of the opportunity."

Do you feel like you are getting stronger with more carries coming off the injury?:

"With preparation comes strength, and we prepare very well in practice and we just do what we know best."

What confidence does running behind a guy like Wayne Gallman give you: