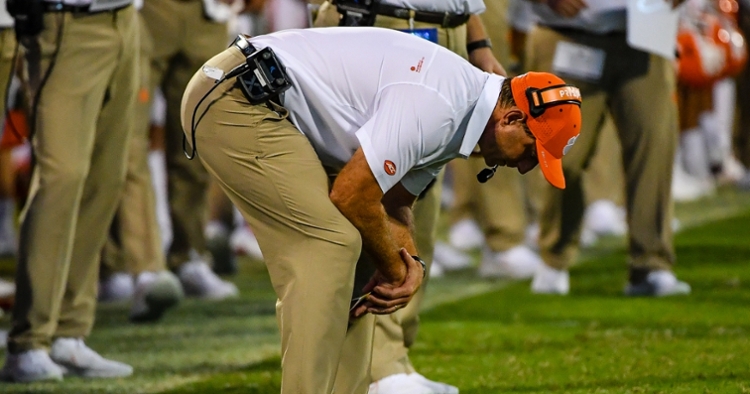 Clemson has plenty of issues to work on over its ACC slate.

Clemson dropped three spots in the latest ESPN power rankings to the edge of the top-10, at No. 10.

"It took much longer than expected, because of a nearly two-hour weather delay and the simple fact that this wasn't supposed to be much of a game at all," ESPN's Bill Connelly said, "but Clemson eventually survived a stiff, frustrating test from Georgia Tech. The Yellow Jackets actually outgained the Tigers 309-285 and held an already spotty Clemson offense to just 4.3 yards per play. But the Clemson defense made a late goal-line stand -- James Skalski stuffed a shuffle pass to Dylan Deveney on fourth-and-goal -- and made one final stop following a safety.

"This could have been a disaster in about 17 different ways, but Clemson held on in the least impressive possible fashion."

Alabama stayed atop the rankings after edging Florida on the road, 31-29. The top-5 is filled out by Georgia, Iowa, Oregon and Penn State.

After the less-than-convincing weekend, Clemson did not register a Playoff prediction among ESPN's panel.

In the ESPN FPI, Clemson fell one spot to No. 5