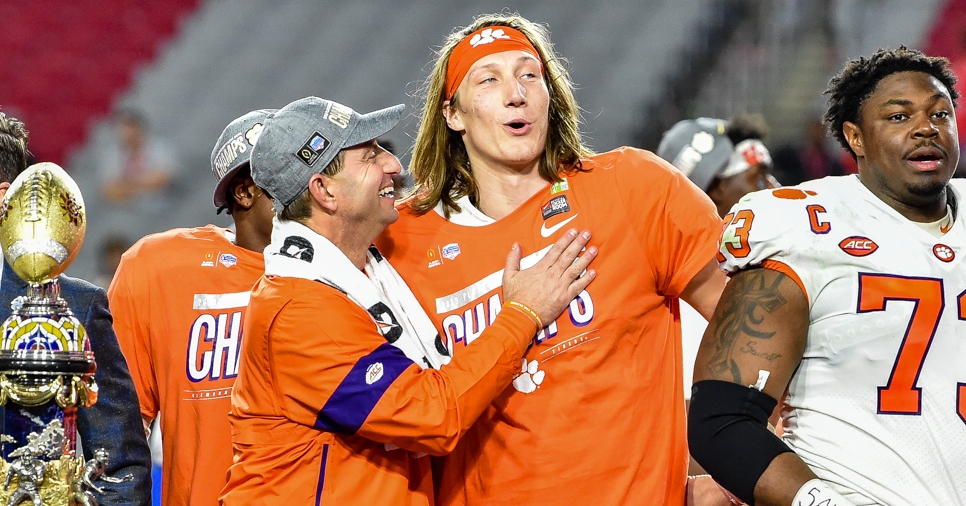 The two have teamed up for plenty of success already and are looking for more.

A great coach and QB will take you pretty far in college football.

For Clemson, it's been back-to-back national championship appearances and one title with Dabo Swinney and Trevor Lawrence -- sights set on another one of each as the presumptive No. 1 team for 2020.

ESPN ranked the top QB/coach duo in college football and Clemson was unsurprisingly on top.

"The funny thing is, Swinney and Lawrence don't have all that much in common," ESPN's David Hale writes. "Swinney embraces the role of plucky overachiever, whereas Lawrence has been a superstar since he was 14. Swinney has a Clark Griswold dad vibe, while Lawrence, with his long blond hair, stands out in any crowd. Swinney is an outspoken salesman, and Lawrence embraces a quiet, private demeanor...

"'Trust, respect, belief in each other and transparency,' Swinney said of the keys to his rapport with Lawrence. 'We both love to prepare and we both love to compete.'"

Lawrence helped lead Swinney and Clemson to the first 15-0 season in modern college football history and 25 wins as a starter in a row. He ended the 2019 campaign on a school-best 239-straight pass attempts without an interception.