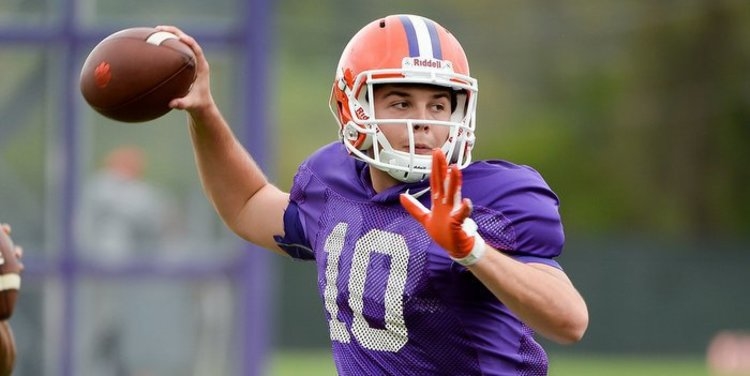 Israel was impressive at the 2017 Orange and White game

The major storyline of the 2017 Clemson football season has been which player will step up and be the starting quarterback for the defending champions.

However, storylines are just not important when it comes to someone's health and vitality. Clemson coach Dabo Swinney shared on Tuesday at the Dabo Swinney media golf tournament that quarterback Tucker Israel has been very ill with stomach issues.

"Tucker has had a rough summer," Swinney said. "That's the best way I can say it. He had a good spring. He had a really good spring game. He is one of those guys that know how to play the game. He understands the game. He is smart. He's got good instincts for the game. He's got some kind of issue going on with his stomach. That's the best way I can describe it. He throws up a lot. They have done a lot of tests on him. They did a colonoscopy and an edo-something. They came back good which is real positive for him. He has had a lot going on. It has just affected him. He has lost a lot of weight. Right now he is just trying to fight back and get healthy. That's really all there is to say. He's not done anything wrong. He's a great kid."

Everyone working at TigerNet.com wishes Israel a healthy and speedy recovery.

2 surgeries Friday keep ya boy in your prayers ???? #Godgotme

Thank you everyone for the prayers and support.. unfortunately it didn't go as well as I had hoped but that's okay cause #Godgotme