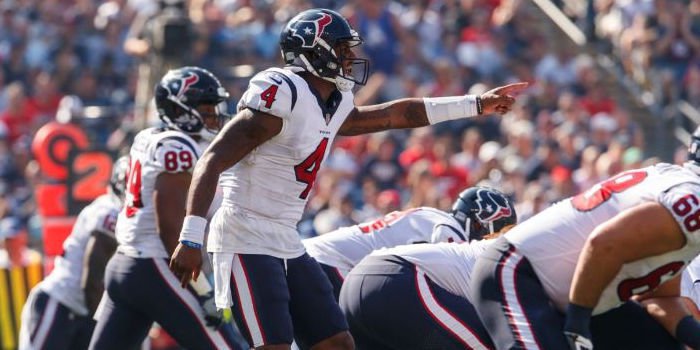 News and notes from week three for Clemson products in the NFL:

One championship quarterback met another when Houston and New England played Sunday – and neither disappointed.

Super Bowl champion Tom Brady fired five touchdown passes – his last, a fade across his body for a game-winning 25-yard touchdown with 23 seconds left in a 36-33 home victory. Watson, who led Clemson to its second national title in January, threw for over 300 yards with two touchdowns to two interceptions. He rushed for 41 yards on eight attempts as well.

“He’s an exciting player,” Texans coach Bill O’Brien said in his postgame press conference. “He’s a player who never says die. You’re always in the game with him because he can make plays on his own. It’s only his second start – and two in a row on the road – and like all rookies he has a long way to go. But I think he’s shown up well in his first two starts.”

“I thought he played phenomenal,” Houston defensive end J.J. Watt told reporters. “He did a great job. You see what he can do with his legs. He gets himself out of tough situations. He can make plays. He’s only to get better with time.”

“The guy’s great,” said former Gamecocks and current Texans defensive end Jadeveon Clowney. I think he’s going to be a great player for this Texans organization. We’re confident in him, and the whole team is behind him.”

In action over three games and two starts, the Gainesville, Georgia product has completed 61.3 percent of his passes for 528 yards, three touchdowns and three interceptions – 124 rushing and one more score.

That one hurt but we will bounce back.

As DeAndre Hopkins walked in to the Texans locker room, he said "this is unacceptable!"

Quick hits: Falcons defensive tackle Grady Jarrett and Bills defensive end Shaq Lawson joined a league-wide protest – much in light of recent comments by President Donald Trump on kneeling protests during the national anthem - by kneeling before their games Sunday. Jarrett commented on the protest after the game. “We had an opportunity to show how we really felt. There are a lot of people out here feeling a certain way, but don’t have a voice. In lieu of the current events, for me, my spirit was moving in a way…It’s just a blessing man. It’s a blessing to be where I am and I feel right.”

Why did Falcons DT Grady Jarrett choose to take a knee today?

Here is #Falcons d-lineman @GradyJarrett on why he decided to kneel today during the national anthem. pic.twitter.com/PWaC3X3ppE

Jarrett posted his best effort statistically since the Super Bowl, totaling four tackles with two for loss in a 30-26 win at Detroit. Lawson grabbed his second sack in as many weeks, adding five tackles total (two solo) in a 26-16 win over Denver…In a game with six former Tigers between the rosters, Chandler Catanzaro and the New York Jets made two field goals in a 20-6 home win over Miami. Teammate Charone Peake suffered an ankle injury that cut short his game with no targets. Miami’s Andre Branch posted three tackles (two solo) with one sack, while Byron Maxwell totaled four solo tackles. New Dolphins linebacker Stephone Anthony was on the active gameday roster (high ankle sprain), but didn’t register a tackle. Rookie Cordrea Tankersley was on the inactive list…Vikings defensive backs Mackensie Alexander – two tackles (one solo) – and Jayron Kearse – one tackles – got in on a 34-17 home win over Tampa Bay, opposite Adam Humphries, who saw 10 targets, six catches and 68 yards…ICYMI Thursday’s action, Sammy Watkins notched his best effort in an LA Rams jersey with six catches for 106 yards and two touchdowns at San Francisco. For the 49ers, Bradley Pinion…Bashaud Breeland put up four tackles (two solo) in a 27-10 Washington home win over Oakland...Steelers receiver Martavis Bryant saw eight targets, but only came down with two catches for 30 yards in a 23-17 road loss at Chicago. Fellow Steeler Coty Sensabaugh registered his first tackle of the season…Speaking of first tackles in ’17, Titans OLB Kevin Dodd notched his first stop in a 33-27 home win over Seattle…Cardinals running back Andre Ellington and receiver Jaron Brown host the Dallas Cowboys Monday at 8:30 p.m…Giants linebacker B.J. Goodson missed a second-straight week with a shin injury. Giants rookie Wayne Gallman was on the inactive list for a third-straight week.