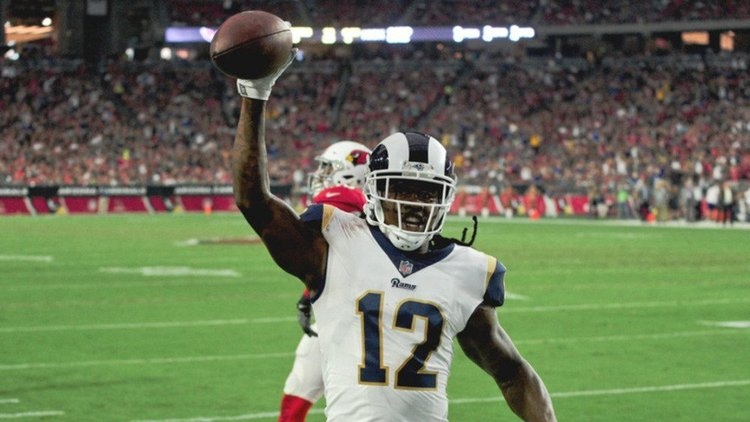 Sammy Watkins is starting to hit his stride in L.A.

Watkins hauled in his fourth touchdown reception in the last five games in a 32-16 win at Arizona over the weekend.

The former Bills No. 4 overall pick saw a season-high nine targets the week before in a win over New Orleans, taking four catches 82 yards. Against the Cardinals, he was targeted four times with three catches for 38 yards.

He’s been one part in a breakout season for the Rams, which improved to 9-3.

“I also understand that this is a new team…they got to figure me out…what I need to do…how I run routes…and I think now we have gotten that down.”

In Houston, Andre Ellington can now claim ‘WRU’ after stepping in at a spot with multiple injuries for the Texans.

Ellington caught five passes for 56 yards in six targets, as the Texans fell 24-13 to Tennessee.

"I kind of knew the ins and outs," Ellington said of the new position. "(Houston QB) Tom (Savage) and other guys helped me as well, making sure I knew what to do. It's not easy, but being a football player I kind of understand football. We didn't get the win, but playing receiver was a lot of fun."

DeAndre Hopkins continued his huge season with eight catches for 80 yards in 14 targets. One reception was a nice one-handed grab:

This week in the NFL was themed around raising awareness for a number of causes with specially-designed cleats. Several Tigers took part and displayed their cleats on social media:

I chose @RallyFoundation for #MyCauseMyCleats...This foundation has impacted my life in so many ways! pic.twitter.com/aTqCZx4VV2

Proud to represent @wwp this week for #MyCauseMyCleats. Thank you to the people of the armed forces, including my dad, father-in-law, uncle, 2 of my brother-in-laws & the folks at Wounded Warriors Project. If we do our part in supporting our veterans it’ll go a long way ?????? pic.twitter.com/JWrYibkJKp

Day 3 of #MyCauseMyCleats week! Former @ClemsonFB WR @adamhumphries13 will be wearing our cleats in recognition of the @CU_Uplifting Chapter and #RareDiseases. If you would like to support Adam or any of our @NFL players VISIT: https://t.co/4xF7NLrNvL #WeTackleRare pic.twitter.com/c4gAKNy7NM

Kidney Disease sucks, but I’m proud to honor my father through #MyCauseMyCleats and show my support for @nationalkidneyfoundation on Sunday to raise awareness about tackling this awful disease.

Quick Hits: Jets kicker Chandler Catanzaro hit 3-of-3 on field goals and extra points in a 38-31 win over the Chiefs…On the defensive side for the Texans, Marcus Gilchrist posted four tackles (all solo) with a pass defensed. Carlos Watkins and D.J. Reader each notched a tackle…Vic Beasley put up five solo stops, including a TFL, while Grady Jarrett totaled a sack in his five tackles (three solo) in a loss to the Vikings. Minnesota DB Jayron Kearse had a tackle and Mackensie Alexander, a pass breakup…Dolphins rookie Cordrea Tankersley picked up a couple injuries (shoulder and ankle), but did post a couple tackles in a 35-9 win over Denver. Stephone Anthony added five tackles (four solo) and Andre Branch, one stop…Seahawks DB Byron Maxwell was targeted early and often and tallied seven tackles (four solo) with two passes defensed in a win over Philadelphia…In a 38-14 loss to Dallas, Bashaud Breeland put up two tackles and a PBU…B.J. Goodson returned to the lineup for the Giants and posted four tackles (two solo, 0.5 TFL) in a road loss to Oakland. Wayne Gallman saw four touches for 19 yards…Colts DB T.J. Green grabbed two tackles for loss and put up five total tackles in a 30-10 loss to Jacksonville…Titans OLB Kevin Dodd notched a tackle in a 24-13 win over Houston…Cardinals receiver Jaron Brown was held without a target against the Rams…Bucs receiver Adam Humphries saw four targets and hauled in four catches for 33 yards…Bills DE Shaq Lawson notched a sack in a loss to the Patriots, but picked up an ankle injury. He’s listed as week-to-week now…49ers punter Bradley Pinion averaged 36 yards and two punts in a win over the Bears…In a 23-20 Steelers win Monday, Martavis Bryant had four catches for 40 yards and two kick returns for 38 yards. Coty Sensabaugh ranked second on the team in tackles (7) with a pass breakup.

Grady Jarrett is a animal. pic.twitter.com/kUP4bKZ7Q3

Watch out, Julio. @GradyJarrett is coming for your position.

See what Grady had to say on 'Ask A Falcon.' pic.twitter.com/oYMRBq1k7T