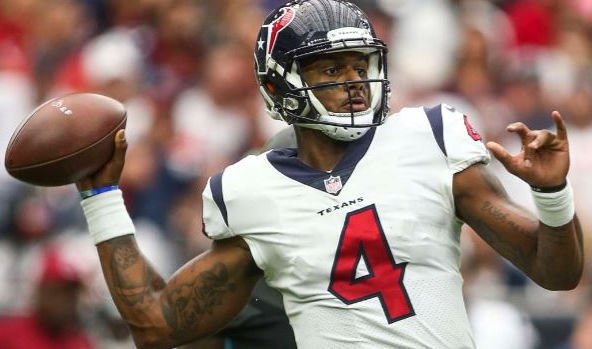 News and notes from week one for Tigers in the NFL:

Deshaun Watson saw the field earlier than expected Sunday, but too late to turn around an all-around bad day for the Houston Texans.

Houston’s No. 2 quarterback going in, the first-round pick entered to start the second half with the visiting Jacksonville Jaguars already up 19-0, and connected with former Tiger DeAndre Hopkins for his first NFL completion - and then a 4-yard touchdown on the same drive.

The rest of the Watson’s outing didn’t go as well, following up the next possession with a fumble and throwing an interception later in the 29-7 loss.

Watson completed 12-of-23 passes for 102 yards and rushed for 16 yards on two carries. Incumbent starter Tom

Savage connected on just 7-of-13 throws for 62 yards in his first-half action, but the kicker was two strip sacks that led to Jacksonville touchdowns.

Did Watson do enough to start Thursday against the Cincinnati Bengals?

"I'll think about it a long time tonight and try to continue to work on Cincinnati, and we'll see what the best approach is versus them," Houston coach Bill O'Brien told reporters Sunday.

Watson looks forward to his next opportunity.

“It was pretty cool,” Watson said of his first touchdown pass, “especially (going to) Nuk (Hopkins). It’s good. Hopefully there will be plenty more.”

No matter the QB, Hopkins was busy.

He received 16 targets, leading the way with seven catches for 55 yards with the one touchdown.

B.J. Goodson made quite the impression in his first NFL start with the New York Giants.

Goodson posted nine solo tackles in the first half and finished with 14 in the 19-3 road loss at Dallas, totaling 18 stops combined to lead the league in both categories through Sunday’s action.

The second-year pro already topped his stats from his rookie campaign, where he had nine tackles (five solo) in the regular season and one stop in the NFC playoffs. Buffalo’s Ramon Humber is the next nearest in solo tackles (12), while New York Jets’ Demario Davis and Jacksonville’s Myles Jacks trail by four in total tackles (14).

Vic Beasley and Grady Jarrett started their run at some Super Bowl revenge by holding on to a 23-17 win at Chicago.

The third-year pro Beasley led the NFL with 15.5 sacks last season and started his 2017 total with one sack in two tackles.

Jarrett didn’t get on the statsheet, but did his part to affect the Bears offense in holding former NC State quarterback Mike Glennon to a 32.3 QBR.

Quick hits: Martavis Bryant’s return after a year-long suspension was relatively quiet – two catches for 14 yards in six targets in a 21-18 win over Cleveland…Bills defensive end Shaq Lawson put up three tackles (two solo) in a 21-12 Buffalo win over the Jets, where in his New York debut, Chandler Catanzaro knocked through his two field goal attempts (long of 52)...Sammy Watkins posted five catches for 58 yards in his debut for the Los Angeles Rams in a 46-9 win over Indianapolis…Washington Redskins cornerback Bashaud Breeland tallied two tackles and three kick returns for 59 yards…New England Patriots tight end Dwayne Allen was held without a catch in two targets in a 42-27 loss to Kansas City…Giants rookie Wayne Gallman was put on the inactive list shortly before their game at Dallas…Dolphins Andre Branch, Byron Maxwell and Cordrea Tankersley and Bucs receiver Adam Humphries had their game postponed due to Hurricane Irma….Jets rookie Jordan Leggett was listed inactive and receiver Charone Peake didn’t register a target…Saints linebacker Stephone Anthony is listed as questionable (ankle) for the New Orleans game at Minnesota Monday night, where defensive backs Jayron Kearse and Mackensie Alexander play.