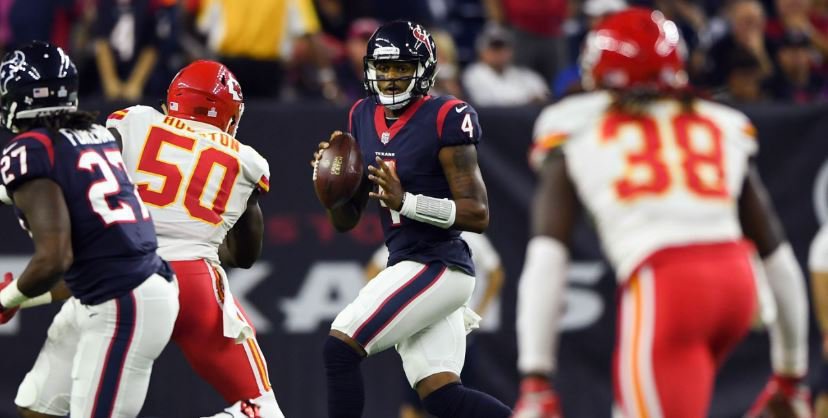 Houston coach Bill O'Brien was impressed with the fight from Deshaun Watson Sunday.

News and notes from week five for the Tigers in the NFL:

Injuries to Houston defensive leaders like J.J. Watt and Whitney Mercilus and a strong start from the Chiefs defense could’ve meant a blowout at the hands of Kansas City Sunday night.

Instead, the Texans, led by a Clemson connection on offense, kept fighting until the last second, in a 42-34 defeat.

KC led 23-7 at the half – rookie Deshaun Watson starting 2-of-8 passing, but he warmed up in the second half, to say the least.

Watson added to his first-half TD pass to DeAndre Hopkins with connections from nine, 48, 34 and one yard out, with no time left, to tie a rookie passing touchdown record. Watson finished completing 16-of-31 throws for 261 yards.

Hopkins was on the other end of two more scores to finish with four catches for 52 yards.

“I’m just going to keep fighting,” Watson said. “Keep the energy. Keep the leadership up with the guys. The game is never over until the fourth quarter and the clock is zero-zero.”

Hopkins says Watson's composure under the circumstances stood out.

“His composure, we were down so much we were down and he was rallying guys on the sidelines,” said Hopkins. “Telling guys we needed to work on something or go down and score every time we touch the ball.”

Hopkins is also impressed with how Watson is attacking NFL defenses early.

“Everybody knows he can run, but he looks downfield and makes plays,” Hopkins said. “The throws he made at the end of the game were some special throws…That’s a good feeling. We’ve got to go out and practice and improve on some things that we didn’t hit on. That’s just him being Deshaun.”

In fewer starts, Watson is now second only to Aaron Rodgers in passing scores this season (12; Rodgers with 13). He leads the NFL through Sunday’s action by a wide margin in ESPN’s total QBR rating (85.6; Dallas’ Dak Prescott next-best at 77.1).

Houston coach Bill O’Brien says Watson is learning like any young player, but not playing like just any rookie.

“I think every game is a learning experience for him,” O’Brien said. “I really think he’s an excellent young quarterback. I thought he competed until the end. He’s a great kid. He’s a lot of fun to coach. He’s got a great future.”

Deshaun Watson put the ball in his left hand to avoid the strip sack. pic.twitter.com/w7TzrGUJO3

Quick hits: Jets kicker Chandler Catanzaro hit the longest field goal in New York Jets history – 57 yards – in a 17-14 win over the Browns…Rookie Giants running back Wayne Gallman made an impact in his second game active, with 11 rushes for 57 yards and five catches for 25 in a 27-22 loss to the Chargers. On the defensive side, B.J. Goodson posted eight tackles (5 solo) with one for loss…In his second start in a row, Dolphins rookie corner Cordrea Tankersley notched two solo tackles in a 16-10 Miami win over Tennessee. On the same unit, defensive end Andre Branch posted two sacks and a tackle for loss. Byron Maxwell was on the inactive list for a second-straight week.…Rams receiver Sammy Watkins was shutout on catches in four targets in 16-10 loss to Seattle…Fellow WRU alum Martavis Bryant hauled in five catches for 21 yards and carried the ball one time for 13 in a 30-9 loss to Jacksonville. Bryant was listed as questionable at game-time due to illness…Andre Ellington was a top target in a 34-7 at Philadelphia, seeing 10 targets and nine catches for 65 yards. Jaron Brown received six targets with three catches for 39 yards…Bills defensive end Shaq Lawson returned from injury (groin) to total two tackles in a 20-16 loss to Cincinnati…Titans OLB Kevin Dodd was on the inactive list at Miami…49ers punter Bradley Pinion averaged 45.7 yards per punt in a 26-23 OT loss at Indianapolis...Bucs receiver Adam Humphries saw five targets with three catches for 51 yards in a 19-14 loss to New England.