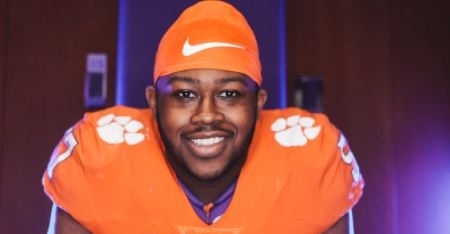 Clemson head coach Dabo Swinney held his press conference on Tuesday and shared the latest with his Tigers as sophomore offensive guard Paul Tchio was entering the transfer portal.

"Paul Tchio has left the team," Swinney said. "He has entered the portal."

Swinney wished him well on his collegiate journey.

"We appreciate his contributions, and we wish him well in what he does next."

Swinney was asked if Tcho leaving midseason surprised him.

"Nothing catches me off-guard in 2021," he said. "Nothing surprises me. Absolutely nothing. Absolutely zero in the world we're in."

Tchio entered the 2021 season playing 80 career snaps over nine games. He was a four-star recruit by all the major recruiting services in high school.

Swinney said that Ryan Linthicum and Tristan Leigh will move up to provide depth and likely still have the opportunity to redshirt.

In other roster news, Swinney said that receiver Joseph Ngata is the only player "definitely out" against UConn.