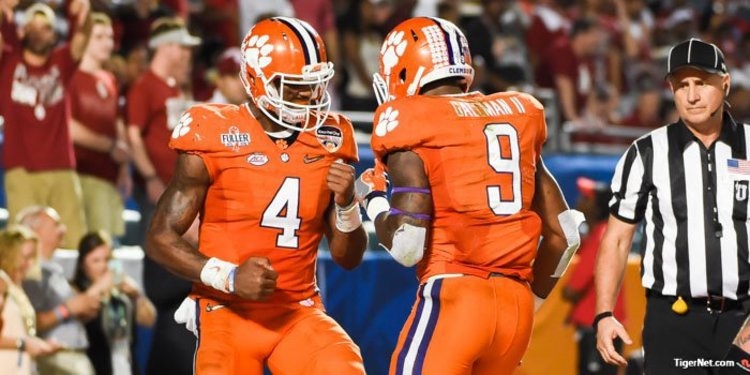 The Deshaun Watson-Wayne Gallman duo would be reunited as starters in this scenario.

A product of a powerhouse that Dabo Swinney's built, Clemson checked in at No. 10 among college programs in a unique hypothetical.

A panel from sports website theScore ranked the top-25 programs based on a roster assembled of active pro players and the top stars from the current college rosters.

"There were discrepancies from our committee when ranking Clemson, but one thing is certain: this team would be extremely fun to watch," theScore writes. "(Deshaun) Watson unloading deep passes to (DeAndre) Hopkins, (Sammy) Watkins, and Martavis Bryant would be practically unstoppable for any team on this list for a full 60 minutes. The Tigers would struggle to field a diverse offense or consistently give their quarterback enough time to make plays, however, as they lack a strong running game and blocking unit.

"On defense, Clemson features two of the game's top young defensive linemen in (Grady) Jarrett and (Vic) Beasley, and with D.J. Reader at nose tackle, the unit would be tough to pass and run against."

As noted, Watson and 'WRU' products in the NFL line the offensive side, with only Mitch Hyatt from the current roster on offense. All pros make up the defensive side, including a 4-2-5 setup with Cordrea Tankersley, Mackensie Alexander and Bashaud Breeland as DBs with safeties Marcus Gilchrist and T.J. Green.

Georgia tops the ranking led by Matthew Stafford at QB, Todd Gurley at running back and A.J. Green at receiver. Florida State, Alabama, Ohio State and LSU round out the top-5.