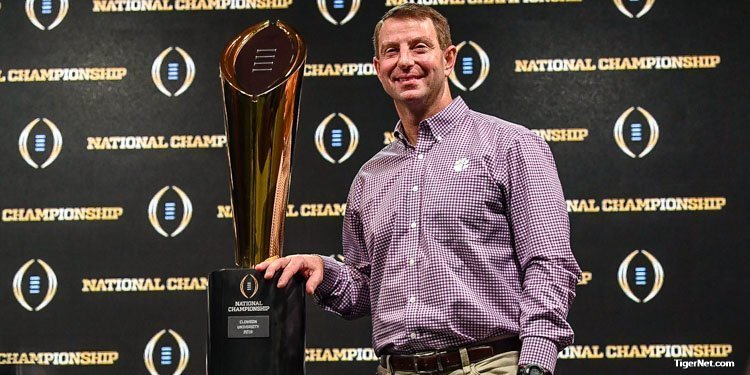 Clemson is only going up in the rate of blue-chip recruits, but it has a gap to make up for the top trio.

Clemson's success over the last decade -- and particularly in the Playoff era -- has it in an elite group from a talent standpoint.

After coming in seventh last year, Dabo Swinney's group is up to fourth in 247Sports' Blue-Chip Ratio (67%), which judges the teams that can realistically challenge for a national title by top-rated recruits signed (50% ratio of blue-chip recruits signed and up).

The top-three remained the same year-to-year with Alabama (84) getting a little separation from Georgia (80) and Ohio State (79). Southern Cal (53) rounds out a group of 16 contenders and Miami is the only other team from the ACC with a shot per the metric (55).

To judge how far Clemson has come in the ratio, the Tigers had a 52% rate of blue-chip recruits in the 2016 title season, which was the lowest figure for a champion in the last decade.

"It is obviously going to be easier for a sub-50 percent recruiter to get a shot at a title, such as Michigan State in 2015 or Washington in 2016, but tougher to actually win," Elliott said. "Non-BCR teams are 2-6 so far in Playoff games, including four losses by three or more scores. The only Playoff win by a non-BCR team over a BCR team was 2014, when Oregon beat FSU.

"But now Cinderella stories will likely have to win three games in a row against teams who are presumably above the BCR threshold. While I have stated that the BCR should not be used to pick games individually, common sense says it is difficult to pull off a three-game parlay against other playoff teams without a ton of Blue-Chip talent."