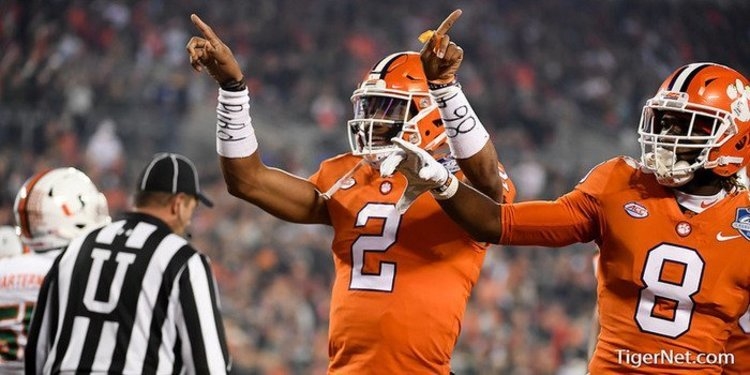 Kelly Bryant was a co-MVP for the offense with Mitch Hyatt.

The offensive most valuable players, known as the Tiger Pride Awards were presented to quarterback Kelly Bryant and offensive tackle Mitch Hyatt. Hyatt is just the second offensive lineman to receive an MVP award in the last 30 years. Kalon Davis was also honored in 2014.

On the defensive side the ball, Clelin Ferrell, Ryan Carter and Dorian O’Daniel were honored with Tiger Pride Awards.

The PAW award that is given for outstanding play, academic excellence, community service went to junior tight end Milan Richard.

Former Clemson outside linebacker and 1981 National Champion Mark Richardson was presented with the Brian Dawkins Lifetime Achievement Award. Richardson is a member of the Clemson Board of Trustees and has many years of success in the business world in Charlotte and as a vice president of the Carolina Panthers.

Solid Rock Award (most solid, consistent and dependable player at each position)

Rookie of the Year - Travis Etienne and Tee Higgins

Specialist of the Year - Will Spiers

Solid Rock Award (most solid, consistent and dependable player at each position

Specialist of the Year - Will Spiers

Proud to win this one with Sean. Thank you to Coach Scott and the entire coaching staff! #ClemsonFamily pic.twitter.com/kBx28aux7t

Thank you to Coach Elliott and the rest of the staff! Proud to win this alongside Travis. More coming in 2018! #ALLIN ???? pic.twitter.com/tlrSiA8lYs

Proud to win this award alongside Kelly. Looking forward to climbing back up the mountain in 2018! pic.twitter.com/K6gWhc9Jop

Gonna miss Coach Batson and the boys! Appreciate all they did for me during my time at Clemson. #ClemsonFamily pic.twitter.com/e2aycdIWTb

The Best Is Always Yet To Come?? #AllIn ???? pic.twitter.com/60yKTCnxms

Blessed to win this award with one of my brothers on the offensive line. Ready to do it all again next season. pic.twitter.com/ViJijLN6B9

Blessed to receive this award. Glad I could help the team go as far as we did. #GameChanger pic.twitter.com/edwM5hUdPj

Proud to stand alongside Dorian and Ryan.

Now I'm trying to make it back here after next season!#ALLIN ???? pic.twitter.com/hkafyoJ9l7

Proud to win this award with Trevion. Thank you to our coaching staff! #ALLIN ???? pic.twitter.com/JhKMRzrdXv

I'm trying to win this award every year of my life! Thanks to the coaching staff and my teammates for a great senior season. #ClemsonFamily pic.twitter.com/n0aNdmtd3t