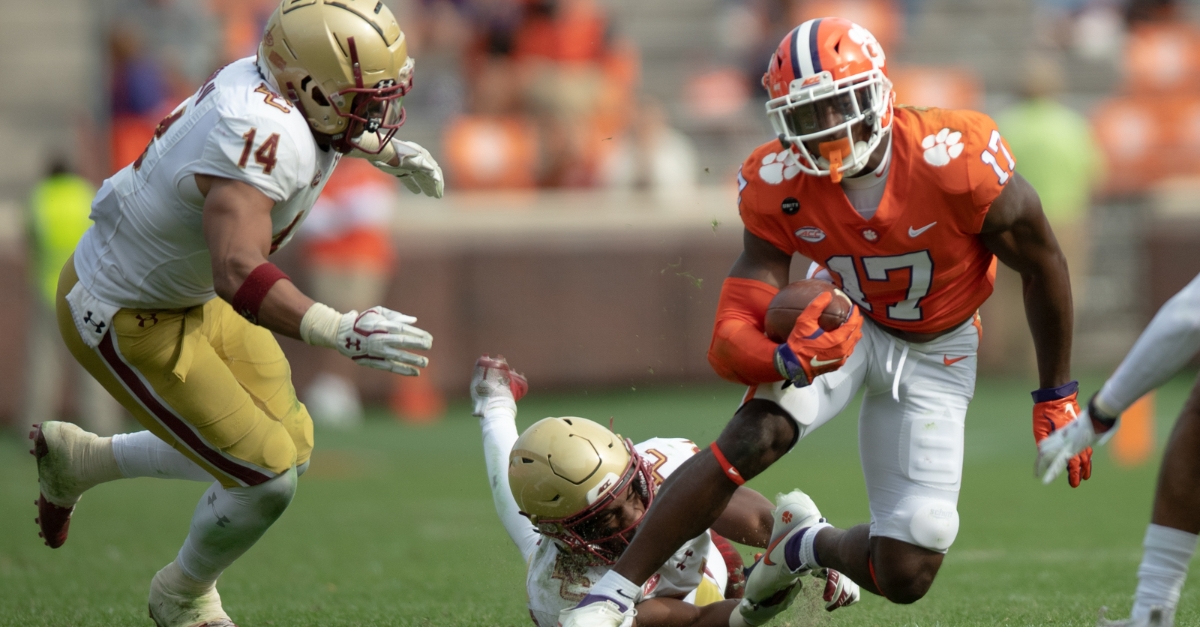 Cornell Powell had a career-high 11 receptions for 105 yards. (ACC photo)

-The game was Clemson’s 15th victory all-time when trailing by 14 or more points at any point of the game. It was Clemson’s sixth such comeback win under Dabo Swinney and its first since the 2019 Fiesta Bowl, when Clemson overcame a 16-point deficit for a win.

-Clemson trailed by two points entering the fourth quarter. It was Clemson’s 10th win under Dabo Swinney when trailing after three quarters and its first since 2018 against Syracuse.

-Quarterback D.J. Uiagalelei made his first career start and completed 30-of-41 passes for 342 yards with two passing touchdowns and no interceptions. He also rushed six times for 25 yards with a rushing touchdown.

-Uiagalelei joined Steve Fuller, Willie Jordan, Patrick Sapp, Nealon Greene, Deshaun Watson and Trevor Lawrence as one of only seven true freshmen ever to start for Clemson at quarterback. He joined Watson and Lawrence as the only true freshmen to win their starting debuts.

-Uiagalelei posted the seventh 300-yard passing game by a Clemson true freshman starting quarterback all-time, joining one by Deshaun Watson in 2014 and five by Trevor Lawrence in 2018.

-Uiagalelei’s 342 passing yards were the third-most by a Clemson freshman (true or redshirt) in his starting debut, trailing Deshaun Watson’s 435 yards against North Carolina in 2014 and Charlie Whitehurst’s 420 yards against Duke in 2002.

Uiagalelei completed his first eight passes of the game.

-On the play, Etienne scored a touchdown in a 42nd career games, breaking the FBS record for most games scoring a touchdown previously held by San Diego State's Donnel Pumphrey from 2013-16. (*NOTE: Entering the 2020 season, the NCAA FBS Record Book listed Florida's Tim Tebow (38 games from 2006-09) and Louisiana Tech's Kenneth Dixon (38 from 2012-15) as the record-holders for most career games scoring a touchdown. Etienne was believed to have broken that record by scoring in a 39th career game against Miami. However, after additional research by ESPN, the NCAA acknowledged an error in its record book and updated it to reflect Pumphrey scoring a touchdown in 41 games from 2013-16.)

-Etienne finished the game with 20 carries for 84 yards with one rushing touchdown and seven receptions for a career-high and school-running-back-record 140 yards with a receiving touchdown. Etienne won the Leather Helmet Award as the game’s MVP, as selected by the game’s television broadcasters. Immediately upon receiving the award in the locker room, he dedicated the honor and handed over the Leather Helmet to Uiagalelei.

-Etienne’s career-high 140 receiving yards set the Clemson school record for receiving yards by a running back, breaking his 114 yards against Virginia earlier this season. He joins C.J. Spiller (two in 2008) as the only running backs in Clemson history with multiple 100-yard receiving games in a single season.

-Etienne (438) passed Duke's Ross Martin (430 from 2012-15) for second on the ACC's career scoring leaderboard. Etienne was already Clemson's all-time leading scorer and the only non-kicker in ACC history with at least 400 career points.

-Uiagalelei scored his third rushing touchdown of the season on a 30-yard touchdown run on fourth-and-1 in the third quarter.

Powell’s 11 receptions are the most by a Clemson receiver in a game since November 2016 against Pitt, when Mike Williams made 15 catches and Artavis Scott had 13 catches. It tied for 10th-most in a game in school history.

-With Powell and Etienne both eclipsing 100 receiving yards, Clemson had two players each reach 100 receiving yards in a single game for the 14th time in school history. It was Clemson’s first time doing so since last year’s South Carolina game, when Tee Higgins and Justyn Ross both reached the century mark.

-Rodgers has now caught at least six passes in five straight games, becoming the first Clemson player to do so since a six-game stretch by Mike Williams in October and November of 2016.

-Rodgers pushed his season receiving yardage total to 586 to set a new single-season career high, passing his 575 yards in 15 games in 2018.

-Defensive lineman Bryan Bresee helped seal the victory by forcing an intentional grounding for a safety. It was Clemson’s first safety since 2016 at Georgia Tech.

-Placekicker B.T. Potter closed Clemson’s final possession of the first half with a 50-yard field goal. It was his school-record-tying fifth career field goal of 50 yards or more, matching the mark held jointly by Chris Gardocki (1988-90) and Donald Igwebuike (1981-84).

-Potter’s school record for consecutive PATs ended at 122 when he missed his first career PAT attempt on his 123rd PAT try of his career in the fourth quarter.

-Clemson threw for 342 yards and reached 300 passing yards in a third straight game for the first time since a four-game stretch against NC State, Wake Forest, South Carolina and Virginia last season.

-The game was played on the 124th anniversary of Clemson’s football debut. Clemson earned a 14-6 win against Furman in its first game on Oct. 31, 1896.

-Clemson and Boston College met in Death Valley in consecutive years for the first time in series history. It was the first time the teams played one another in back-to-back seasons at the same venue. The only time in the series the teams previously faced one another in the same region in back-to-back years was in the 1950s, when Clemson faced Boston College at Braves Field in 1952 and then at Fenway Park in 1953.

-Clemson played its final of four home games in the month of October. October 2020 was the seventh time Clemson has played at least four home games in a single month, joining the 1920, 1987, 1989, 1993, 2008 and 2011 campaigns. In every instance (including this year), Clemson posted a winning record in those contests.

-Clemson played its 21st game all-time while ranked No. 1 in the AP Poll, the 15th-most since the poll's inception in 1936. It was Dabo Swinney's 20th game coached at No. 1, passing Jim Tressel for sole possession of 17th all-time.

Clemson went 4-0 at home in October, winning four home games in a single month for only the second time in school history. Clemson opened the 2011 season with four consecutive home games in September, earning wins against Troy, Wofford, Auburn and Florida State to kick off an ACC Championship season.

Clemson improved to 19-2 all-time when ranked No. 1 by the Associated Press. Clemson has never lost a regular season game as the nation's top-ranked team.

Clemson improved to 15-7 all-time in games played on Halloween. The win pushed Clemson to 7-2 all-time in Halloween home games and gave Clemson a 6-1 mark at Death Valley on that date since the Memorial Stadium's opening in 1942.

Clemson won its 27th consecutive home game to extend its school record for the longest home winning streak and longest home unbeaten streak in school history. Of the 120 players on Clemson's 2020 roster, 111 have never experienced a home loss in their Clemson careers. Nine fifth-year seniors on Clemson's 2020 roster were on the 2016 team that recovered from a home loss to Pitt by winning the national championship that season.

Clemson won its 28th consecutive game against an ACC opponent, including postseason play. The 28-game winning streak against conference opponents ties Clemson with the 2012-15 Florida State Seminoles (28) for the second-longest streak in ACC history.

Clemson improved to 19-9-2 all-time against Boston College, dating to the teams' first meeting in the Cotton Bowl on New Year's Day in 1940.

Clemson improved to 12-4 against Boston College since the Eagles joined the ACC in 2005.

Clemson improved to 7-0 against Boston College at home under Head Coach Dabo Swinney.

Though 2020 is technically being played sans divisions, Clemson defeated a traditional ACC Atlantic Division opponent for a 17th straight time and for the 37th time in its last 38 opportunities.

Clemson improved to 26-1 in October games in the College Football Playoff era (since 2014).