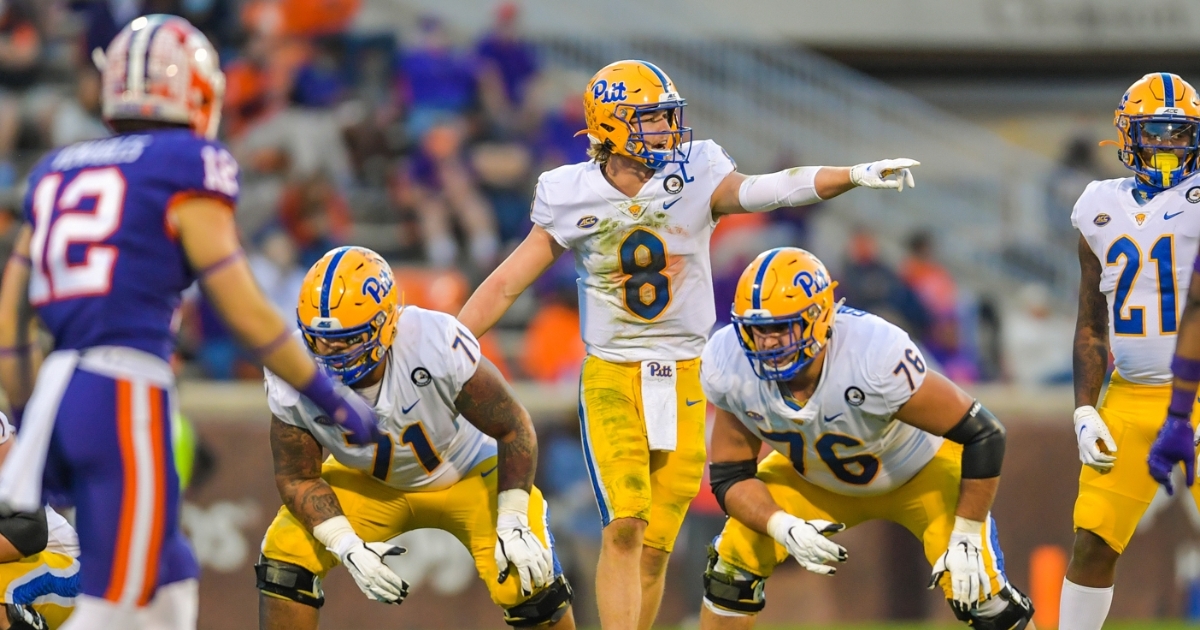 Pickett (8) has thrown one interception in 205 attempts this season after tallying four of them in one game against the Tigers last year.

From a statistical standpoint, the outlook for Clemson in its matchup at No. 23 Pittsburgh Saturday (3:30 p.m./ESPN) is, well...different than we’ve seen in these kinds of games for a while.

In the Vegas odds, Dabo Swinney’s Tigers are an underdog in the regular season for the first time since 2016 (at home by a point to Louisville) and by the most points since 2014 (Florida State, 9.5), as a 3.5-point dog.

One analytics site, CFB-Graphs.com, only gives Clemson a 20.2% shot of coming away with a much-needed win for its hopes of a seventh consecutive ACC crown.

ESPN’s Football Power Index registers one of the Tigers’ lowest chances since its creation with a 36.9% percent shot at victory.

Less than a year ago, Clemson dominated this same Panthers program in Death Valley, 52-17. You already have an idea of what Clemson’s issues have been since then, but where does the confidence come with Pitt?

Here’s an overview of how the sides matchup:

In CFB-Graph’s chart below, you can see all the red marking Clemson’s low offensive numbers through six games. It backs up what we’ve all witnessed:

As Swinney has pointed out repeatedly this week, his Tigers are in trouble if the offense can’t find some kind of rhythm and put up points.

The metrics we typically track are not as far down the road betting against the Tigers as CFB-Graphs.com, but there probably should be some caveats here.

Somehow, Clemson is still No. 4 overall in the SP+ rankings and that’s the one metric picking Clemson from the group. Even SP+ founder Bill Connelly would admit that particular ranking is skewed and affecting the pick:

It still has Clemson propped up awfully high (too high, probably) and gives them a 1.5-point edge.

I'm always queasy about doing this because people run with it more than I'm comfortable with, but based solely on '21 data, the projection would be Pitt by 8.9.

Clemson would still rank 10th with 2021-only data because the defense is so good. But Pitt would rank THIRD....

While the Clemson roster has taken its hits, there is still plenty of talent to execute that much-anticipated breakthrough and put together the first complete effort of the season against an FBS opponent.

Add into the prediction formula just how well Pitt has played this year -- and really there’s no variety of result Saturday that would surprise me. I’m wary of picking a Panthers team that might come in too amped for their biggest home game in quite some time -- facing a sleeping giant in Clemson that gets to fully embrace the underdog role.

Pitt’s strength as a passing attack meets an efficient pass defense for the Tigers -- and that should be a great battle. The big question mark continues on from the opener with what exactly DJ Uiagalelei and company can produce on the other side. The Panthers showed some warts against an efficient, RPO-centered Western Michigan attack in a home loss last month (517 yards given up; 328 yards per game and three TDs total surrendered in two FBS games since) -- can the Tigers take advantage? We’ll see if Clemson fans are pleasantly surprised or there’s more of the same from the first half Saturday.

(SP+ is a metric from ESPN's Bill Connelly, formerly of Football Outsiders and SB Nation, that combines ratings for the five factors of efficiency, explosiveness, field position, finishing drives and turnovers. FPI is the Football Power Index that has a similar projection-style model from ESPN as well. FEI is a Football Outsiders projection tool that judges team efficiency for a projection. #EPA is a statistic that seeks to measure the value of individual plays in terms of points. This is done by calculating the Expected Points (EP) of the down, distance, and field position situation at the start of a play and contrasting it with the situation at the end of the play. ^Success rate is gaining at least 50% of the yards required on first down, 70% of the yards to gain on second down and 100% on third or fourth down.)