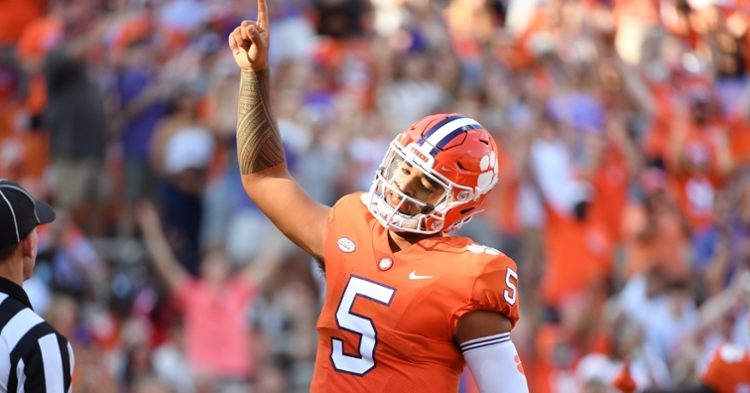 Does Uiagalelei and the Tiger offense turn it around in Raleigh?

For the former, the explanation out of both coaches and players is a combo of a litany of technique issues -- despite good effort -- and either a talented defense (Georgia) or a good scheme (Georgia Tech) containing the big plays typical of the Tigers offense.

Now a trip to NC State can either serve as a bounceback game or possibly the start of some unfamiliar and uncomfortable territory (recently) for Clemson in the ACC and national picture.

The big question, however, is if Clemson’s struggles offensively continue -- will the upset-minded Wolfpack take advantage?

Here’s how the teams shape up coming into the matchup:

The SP+ still has at least another week of data to reconfigure its move from preseason projections to what’s happening in 2021, which explains Clemson being rated as a top-15 offense against the Football Power Index’s No. 82 efficiency rating for the same group.

The FPI is a big fan of NC State’s defense, rating them not too far behind Clemson (No. 10 vs. No. 6), after shutting out Jeff Scott and USF in the opener, giving up 17 on defense despite three turnovers from their offense in a loss at Mississippi State, and holding Furman to under 200 total yards with only a late score surrendered in a blowout. They did lose a couple of key starters after week two, however, but there are veterans in that group still.

The sample size is still small, and both have beat up on an FCS opponent in their three games and lost to an SEC foe away from home. This one might prove to be the most we learn about either when it comes to how the division will unfold.

The opportunity is certainly there for Dave Doeren’s Wolfpack and the metrics see the game right around where the Vegas line is. Doeren’s history in these types of games doesn’t suggest they pull it off, however.

Doeren is winless against the Tigers (0-7 with a 22-point average margin) and 3-19 against ranked opponents overall at NC State, with only four of those losses within single-digits (two being vs. Clemson).

Streaks eventually come to an end, and Doeren may very well pick up a win over Clemson before his coaching career is done -- in this game, I think Clemson shows the improvement needed to escape Raleigh with a win Saturday, however.

A Georgia Tech blog provided an extra look into the ugly box score for the Tigers out of the 14-8 win last week.

Obviously passing was a struggle for Clemson. Out of 26 called passes in 66 snaps, the Tiger offense averaged 5.46 yards per attempt, 4.18 air yards per completion and 6.92 air yards per attempt. As coaches have pointed out this week, Georgia Tech dropped eight in coverage primarily but the data confirms that Clemson didn’t even really try to push it downfield.

Yates did all he could do even though the battle up front was a lost cause. The defense did everything possible to put GT in a position to win. Be proud guys. @FTRSBlog pic.twitter.com/PH05yETRs1

How did the effort compare to the Georgia opener? The advanced box score below has some different kinds of stats, but with more pass plays (44), Clemson had a 36.4% success rate, with only three passes of 15-plus yards and two of 20-plus yards.

Georgia contained the Clemson ground game to an 18.8% success rate with no runs of 12-plus yards and a remarkably high 75% of runs stuffed. The Tigers ranked 25th nationally in runs stuffed at the line last season (15.9%).

Despite a strong effort from the Tiger defense in the opener, Georgia still managed a 52.5% overall success rate to Clemson’s 31.7%. The Tigers’ second game in the Tar Heel State this week will have to go a lot better versus another standout defense by the numbers.

46 rushing plays between the two teams and only ONE went for 12+. Including Sacks, UGA held Clemson to 2 rushing yards. This is their lowest total since their 2008 Week 1 game vs Alabama. pic.twitter.com/ot0lFKeWdc

(SP+ is a metric from ESPN's Bill Connelly, formerly of Football Outsiders and SB Nation, that combines ratings for the five factors of efficiency, explosiveness, field position, finishing drives and turnovers. FPI is the Football Power Index that has a similar projection-style model from ESPN as well. FEI is a Football Outsiders projection tool that judges team efficiency for a projection. ^In the line yards per carry stats, the line gets credit for rushing yardage between 0-3 yards (instead of 0-4) and 50% credit for yards 4-8. Anything over 8 yards is quantified as a highlight opportunity, and credit goes to the runner. As with the pro definition, lost yardage still counts for 125%. [Garbage time is filtered out for all line yardage averages.])