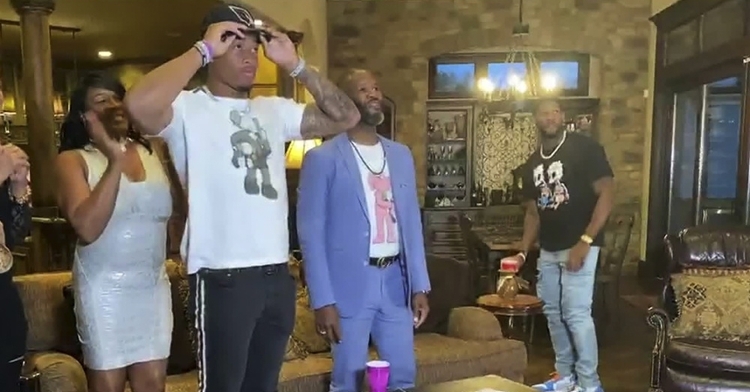 All seven rounds of the 2020 NFL Draft were presented across ABC, ESPN, and NFL Network – the second straight year that The Walt Disney Company partnered with the National Football League to offer a multi-network presentation of the entire Draft.

“I couldn’t be more proud of the efforts and collaboration of our clubs, league personnel, and our partners to conduct an efficient Draft and share an unforgettable experience with millions of fans during these uncertain times,” said NFL Commissioner Roger Goodell. “This Draft is the latest chapter in the NFL’s storied history of lifting the spirit of America and unifying people. In addition to celebrating the accomplishments of so many talented young men, we were pleased that this unique Draft helped shine a light on today’s true heroes – the healthcare workers, first responders, and countless others on the front lines in the battle against COVID-19. We are also grateful to all those who contributed to the NFL family’s fundraising efforts.”

“This year’s NFL Draft clearly took on a much greater meaning and it’s especially gratifying for ESPN to have played a role in presenting this unique event to a record number of NFL fans while supporting the league’s efforts to give back,” said ESPN President Jimmy Pitaro. “The success of this year’s Draft is a testament to the unprecedented collaboration across the NFL, ESPN, and The Walt Disney Co. in the midst of such a challenging time.”

With over 600 camera feeds in the homes of everyone from the Commissioner, more than 85 Draft prospects, 32 NFL Head Coaches, 32 NFL General Managers, Fans, College Football Coaches and many others, the 2020 NFL Draft offered unprecedented access to deliver the best possible experience for fans. To pull off this broadcast feat, the NFL utilized technology from partners such as AWS (Hosting/managing video feeds), Verizon (Provided Verizon phones and connectivity for remote locations), Microsoft (Microsoft Teams assisted with all League to Club and Club to League communication for all Draft selections), and Bose (Provided best-in-class headphones for superior audio for all Draft participants).

In addition to the telecast of the 2020 NFL Draft, an average of over 5.4 million daily viewers watched in excess of 46.7 million total minutes of “Draft-A-Thon LIVE,” a massive fundraising campaign aimed at raising much-needed funds for COVID-19 relief efforts. Draft-A-Thon LIVE was presented all three days of the 2020 NFL Draft and available through NFL digital properties across devices (phone, PC, tablet and connected TVs) as well as a number of digital platforms including Twitter, Facebook, YouTube, Twitch, TikTok, Reddit, TuneIn, Yahoo! Sports and more than 100 news websites via SendtoNews. Celebrities such as Kevin Hart, Blake Shelton, Jeff Daniels, DJ Khaled, Ninja, and Carli Lloyd joined dozens of current NFL players and Legends and other stars to participate in Draft-A-Thon LIVE.

In addition to raising funds, Draft-A-Thon LIVE paid tribute to healthcare workers, first responders, and others on the front lines of the battle with COVID-19. To date, the NFL family has raised more than $100 million in COVID-19 relief.

At NFL.com/auction fans can bid on autographed NFL items and exclusive packages to support COVID-19 relief as well. The NFL does not retain any profits from the sale of these items or experiences.