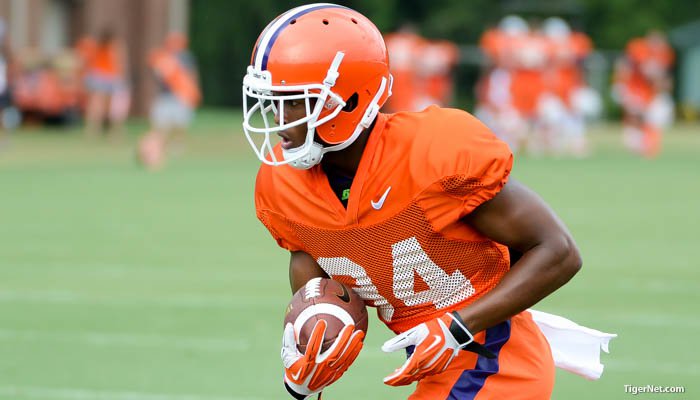 CLEMSON – Things were more than a little fractious at times during Friday’s practice and will only get hotter as the Tigers don full pads for the first time Saturday.

A light rain at the beginning of practice gave way to cloudy and humid conditions as the Tigers practiced for two-and-a-half hours on the practice fields Friday afternoon, the fourth practice of fall camp. It was the second day in shells with full pads coming Saturday.

Clemson’s young group of wide receivers has drawn a lot of attention early in camp and Friday wasn’t any different.

One of the highlights of Friday’s practice came when the wide receivers and defensive backs went through a period of one-on-ones…. Ray-Ray McCloud

Jayron Kearse
Jr. Safety
#1 6-4, 210
Fort Myers, FL
View Full Profile during one of his turns and made a highlight-reel play. Kearse tried to jam McCloud at the line, but instead of giving up on the play the freshman threw the 6-4, 210 pound Kearse to the ground and continued across the middle of the field for the catch. The smack talking ensued as Kearse pled his case with defensive backs coach Mike Reed

Mike Reed
Assist. Coach / Defensive Backs
View Full Profile and some of the other receivers.

The next time the two came to the line, McCloud turned on the jets to break away from Kearse, but, unfortunately, the ball was overthrown. Kearse let McCloud have an earful and then waved bye as he trotted back down the field.

Christian Wilkins
Fr. Defensive Tackle
#42 6-5, 305
Longmeadow, CT
View Full Profile looked unblockable at times early in the practice. It’s just shorts and shells, and the hitting won’t start until Saturday, but Wilkins just has the “it” factor. His quick twitch reflexes and footwork make him one of the best players on the field, regardless of experience.

After one particularly quick move, I turned to another media member, and we both just said, “Wow.”

At the end of the practice, they all attempted kicks from 42-yards and Spence and Huegel made their kicks while Groomes left his wide right.

Mackensie Alexander
RS So. Cornerback
#2 5-10, 190
Immokalee, FL
View Full Profile , three straight times and three straight times Renfrow made the catch, the last for a touchdown. The most impressive was the first catch as Alexander tried to throw Renfrow to the ground right as the ball got there to force the incompletion, but Renfrow was having none of it.

Mark Fields
Fr. Cornerback
#24 5-10, 185
Cornelius, NC
View Full Profile showed excellent coverage skills for a true freshman who has only been on campus for just a few weeks.

Deon Cain
Fr. Wide Receiver
#8 6-1, 190
Tampa, FL
View Full Profile showed off his three-step drop in between drills as the receivers were throwing the ball amongst themselves.

*The strong relationship between Artavis Scott

Deshaun Watson
So. Quarterback
#4 6-2, 205
Gainesville, GA
View Full Profile is evident. The two mixed up their signals on a throw and Watson immediately went to Scott to see what happened. That’s happened a few times so far in camp.

Dabo Swinney
Head Coach
View Full Profile ’s fantasy camp also attended practice. There was one grizzled gentleman who was getting his money’s worth - he was working with the wide receivers playing the part of linebacker and catching the balls after each rep.

Adam Choice
So. Running Back
#26 5-9, 215
Thomasville, GA
View Full Profile , who tore his ACL during the Boston College last fall, went down with a knee injury. He was immediately taken to the sideline and examined by Danny Poole, Dr. Larry Bowman and Len Reeves. It looked like they were administering tests on his surgically repaired left knee. Choice eventually slowly walked back to the offense’s sideline but didn’t participate in the final periods of practice.