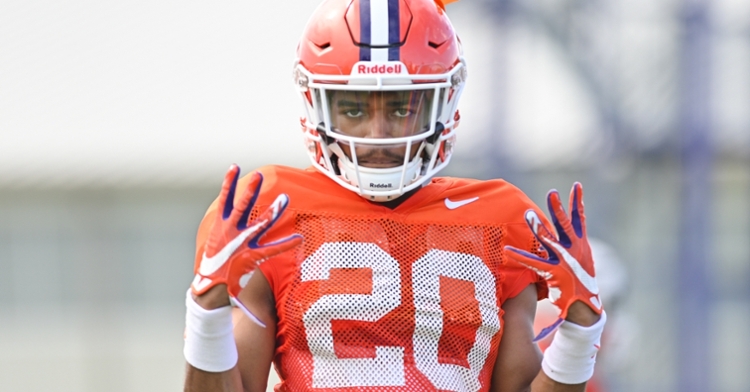 Williams looks to make an impact in 2020. (Photo per Clemson athletics)

With the changes made to the season and the uncertainty of the months to come, one thing remains unwavering: the brotherhood shared between Clemson teammates on and off the field.

Clemson defensive back LeAnthony Williams knows all about that.

“You know just we go out there everyday where we want to compete and have fun," Williams said earlier this week. "I feel like our back-seven are like if a guy makes a play I feel like you know all of us should be happy for him, just keeping the mindset positive," junior cornerback LeAnthony Williams told the media. “If a guy doesn’t make a play then we are going to keep him up, and if he makes a good play then we are going to hype him up even more. So, I just feel like in this secondary we are all making plays so we are going to keep each other up, and try and keep up the good mindset.”

Williams expanded on his thoughts on the upcoming secondary class that fans can expect to see this season.

“I feel like during the spring we had a lot of space to make up for," Williams said. "We had a lot of guys coming in and we haven't really played a lot of ball on the field but I just feel like we just came in during the spring and this fall camp there was a lot of space picked up between that. I feel like the guys we have now are just as good if not better since we started fall camp. I just feel like right now we are in a good spot with the secondary guys, where everyone looks good and everyone is looking fast, so I feel like that's a plus for us.”

Williams finished last season with two tackles and a pass breakup over the course of 78 snaps in 11 games. With the 2020 campaign put into motion, Williams hopes to bring his skills to light after having an impressive fall camp.

“Camp has been great. I just kind of come out here with the same mindset everyday, like it's the first practice, just being as physical as I can," he said. "Just having a postive mindset everyday, working on my craft, and the little things like going over the plays after practice. Just everyday things and the little stuff. I'm just trying to be a better player for my teammates really.”

Speaking of his future with the Tigers, Williams couldn’t help but share his excitement about playing his home state team, the Georgia Bulldogs, as next year’s season opener.

“I wished for a lot of things, but playing Georgia would probably be one of the top ones," Williams said. "And then we get to play Georgia Tech this year at Georgia Tech, so that's a great thing. I'm still a Georgia boy at heart. But since we get to play them I'm going to prove my stuff out there.”