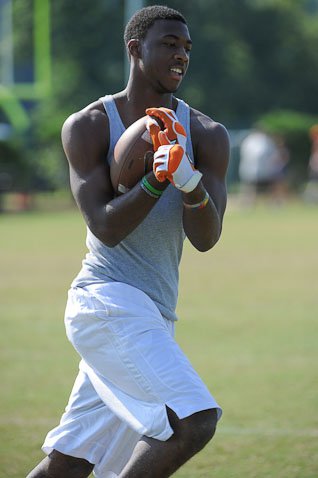 Mike Williams
Wide Receiver
6-5, 205
Holly Hill, SC
View Full Profile received an invitation to play in the Shrine Bowl- a feat that few from his area have accomplished in recent seasons.

Williams, a four-star wide receiver out of Santee (SC) Lake Marion who committed to the Tigers over Alabama and South Carolina during the summer, was the first Lake Marion player selected to the Shrine Bowl in more than 12 years.

Williams told TigerNet Thursday evening that he is honored to play in the Shrine Bowl and to be following in the footsteps of some of his favorite players.

“My coaches called me into a meeting with the Shrine Bowl representative, and they told me that I made the team,” Williams said. “It’s a big-time all star game. There are a lot of players that have played in it, like Alshon Jeffery and Da’Quan Bowers. Not a lot of people from teams around here make it.”

Williams was in Clemson for the Georgia Tech game, and he said that he’s not sure if there’s a defense that can stop the Tigers’ high-powered offense.

“I was at the Georgia Tech game,” Williams said. “The atmosphere was really good. The offense is going to move the ball regardless of who they’re playing. I don’t think anybody can stop them because they have so many weapons. They can be a great team.”

Current Clemson wide receiver DeAndre “Nuk” Hopkins has been unstoppable so far in 2012, but Williams said that when he gets to Clemson he hopes to surpass Hopkins’ accomplishments.

“They [the Clemson coaches] tell me that I will play in the spot where Nuk is at,” Williams said. “That game where he had like 170 yards was crazy. When I get there, I’m going to have a lot of yards because nobody will be able to double-team me because we will have so many weapons. If they double me, then somebody else will be open. I want to be even better.”

As a junior Williams had 65 receptions for 1,269 yards and 12 touchdowns. He also played quarterback and completed 20 passes for 354 yards and three touchdowns.

Williams said that the Clemson coaching staff can’t wait to get him on campus and turn in him into an even better receiver.

“They are just saying that they can’t wait to get to coach me,” Williams said. “They can’t wait for that moment when I get on campus.”