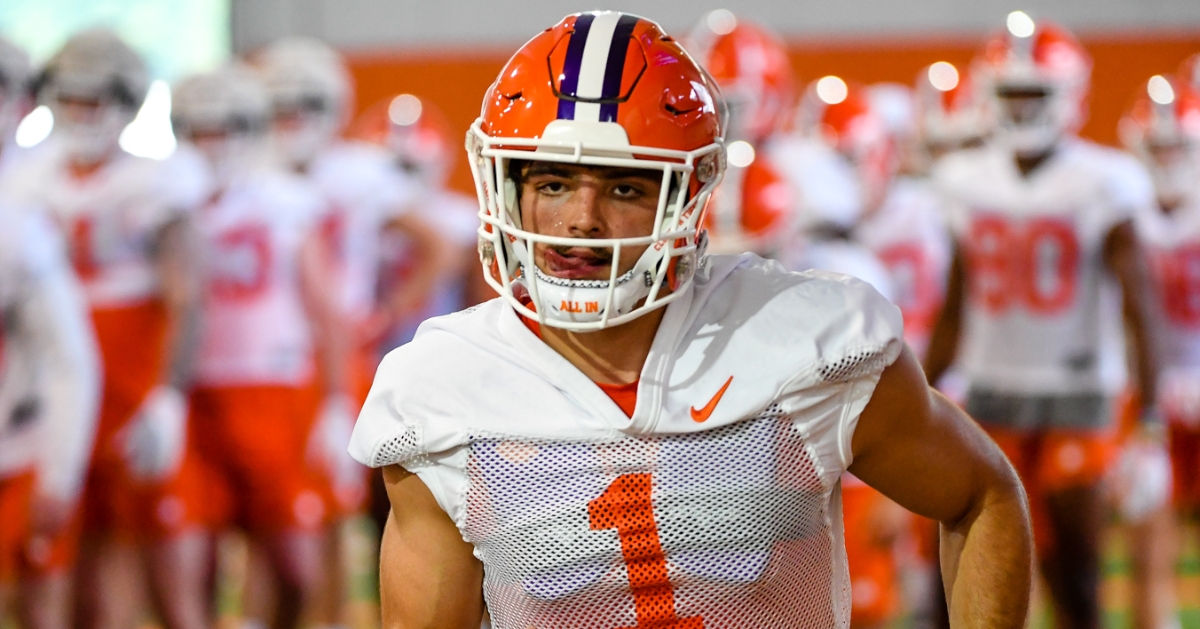 CLEMSON – A healthy Will Shipley is taking advantage of every opportunity during fall camp and looking forward to year one of Clemson's offense under Brandon Streeter.

The sophomore Clemson running back missed spring practice due to an ankle injury, so his excitement for fall camp is off the charts.

"It was tough. I hate being sidelined," Shipley said Friday after Clemson's first day of fall camp. "But to watch Phil Mafah put in the work-- holy cow, he progressed to a different level. But it was tough. I'm out here now thanking God for putting one foot in front of the other."

Shipley looks at the dog days of summer as a time to prepare for a run to the national championship.

"The grit. It's so gritty out here, man. This is when you win a national championship and get close with your brothers that will last a lifetime," Shipley said."

During the summer and fall camp, Shipley really wants to hone in on working as a pass catcher.

"I'm really looking forward to it. I've kind of worked in silence on that part," he said. "It's definitely something I wanted to improve from last season. I want the coaches to have full trust in me.

"My hands have never truly been a question to me. I think last year was more of an attention thing, an adrenaline thing. The moment was sometimes too big for me last year. I'm not afraid to admit that. I watched a lot of film, and it was just me taking my eyes off the ball or being too jittery for whatever reason. It's something that comes with experience and age. As a sophomore, I could even just feel it today; everything was a lot slower. I'm learning to appreciate that."

Clemson has a running back room with Shipley, Mafah, and Kobe Pace – all of whom are holding each other accountable to get their very best every day.

"We are holding each other to a standard," Shipley said. "We love each other. But we're competing out there, and we all know that. We are going to make sure we hold each other to that standard every day."

Clemson's offense will operate under the tutelage of Streeter this season, and Shipley said the offense is simpler and moving faster than last season.

"It's just more simplistic and more genuine," Shipley said of the offense. "Coach Streeter, he's really listening to us. We feel like there's respect both ways. Not saying there wasn't with coach (Tony) Elliott. Everybody can understand what we're doing better, but we're moving faster. It's more efficient. We're trying to up the tempo a little bit and get the ball in the playmakers' hands."

With the Clemson offense having more veteran players this season, Streeter and the other offensive coaches are listening more to the players.

"Yeah, there's definitely a little bit of that in there," he said. "And, really just all the coaches. I think that's something that has come from the top down. Coaches are amazing, but the way we are going to get where we want to go is by the players on the field. And I think everyone understands that."

For Shipley, a simpler offense and being a year older has led to increased confidence and the game slowing down.

"I can tell you that camp has slowed down tenfold," he said. "When I stepped on the field for the first time against Georgia, I can tell you I didn't know what the hell was going on. Today I see things happening before they do. I see stunts. I see where 'backers are going."

Clemson DL out against Boston College
Post your comments!