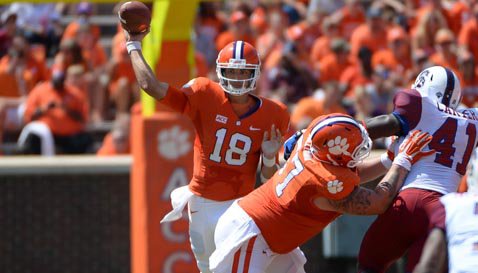 Stoudt played in eight games last season and completed 47-of-59 passes for 415 yards and five TDs.

If Clemson wants to be considered an elite program, that statement will be put to the test in 2014.

Last year provided many highs, as well as a few lows for the orange-clad faithful, but with the loss of Tajh Boyd

Tyler Shatley
Gr. Offensive Guard
#62 6-3, 295
Icard, NC
View Full Profile , many are left to wonder what the Tigers’ offense will look like next season.

With spring practice, summer workouts, fall camp and 234 days until the ball is spotted Dabo Swinney and company have plenty of time to figure out the depth chart; however, in the business of college football, we don’t like to wait so let’s take a look at how the Tigers’ offensive starting lineup might look on August 30th.

Tomorrow we will tackle the defensive side of the ball.

Clemson loses two starters on the offensive line in Thomas and Shatley, but have experienced depth at just about every position.

Robbie Caldwell
Assistant Coach / Offensive Line
View Full Profile have said that they will do whatever it takes to get the best five linemen on the field, and I think we saw that when Isaiah Battle

Ryan Norton
RS So. Offensive Line
#58 6-3, 270
Simpsonville, SC
View Full Profile blocks the way. Could Norton move to the vacated right guard position so the coaches can get the five best on the field? Will Tyrone Crowder

Tyrone Crowder
Fr. Offensive Line
#55 6-2, 325
Marston, NC
View Full Profile make an impact and move into one of those spots?

Stanton Seckinger
RS So. Tight End
#81 6-4, 210
Isle of Palms, SC
View Full Profile showed flashes of brilliance at times last season, scoring the game-winning touchdowns against Georgia and Ohio State, but also showed that he is still learning to be a tight end.

My guess is that Seckinger will start against Georgia on August 30th, but if Leggett continues to improve, there might be no keeping the talented sophomore off the field.

Clemson loses a ton of talent at wide receiver with the early departure of Watkins and Bryant, but fortunately, the Tigers are in a position to reload after bringing in a stellar freshman class.

I’m going to go out on a limb and say that 2014 could be the best group of wide receivers – as a whole - to ever play at Clemson University.

Charone Peake
Jr. Wide Receiver
#19 6-3, 200
Moore, SC
View Full Profile tore his ACL during a freak accident in practice on September 11th but will have at least six months of recovery and rehab time before spring practice kicks off. Prior to the injury, Peake had catches for 84 yards and was poised for a breakout year. I suspect that he will come back better than before and will become the go-to guy on Clemson’s offense.

Mike Williams
Fr. Wide Receiver
#7 6-5, 205
Vance, SC
View Full Profile had a great freshman year, despite playing beside Watkins and Bryant, catching 20 passes for 316 yards and three touchdowns. Williams drew praises from the coaches for being a lot like former Clemson receiver Nuk Hopkins, showing his ability to be sure-handed and be able to highpoint the ball – especially in the endzone on the fade route. Can Williams take that next step and become a consistent threat?

With the departure of Watkins and Bryant, someone will need to come in and fill the role of the deep threat. Who better to come in and fill that role than Tarpon Springs (FL) East Lake native Artavis Scott, who has already enrolled for the Spring term at Clemson? After Clemson head coach Dabo Swinney’s high school camps, the coaches likened Scott’s skillset to that of Watkins and former Clemson great Jacoby Ford

The Tigers also get 2013 signee Kyrin Priester, who many think might be the most polished receiver of the newcomers. Priester could step in and play right away. Add in Adam Humphries - Mr. Steady - and Clemson's receiving corps looks to be in good shape.

Clemson has had a 1,000-yard rusher each of the last three seasons with Roderick McDowell obtaining the feat in 2013 and Ellington eclipsing the mark the previous two seasons. Who will become the next great Clemson running back?

Tyshon Dye
Fr. Running Back
#23 6-1, 205
Elberton, GA
View Full Profile get healthy and grab the starting role? Or will the forgotten man of the 2013 recruiting class, Wayne Gallman

Dye was the prize recruit in 2013, but after watching practice and talking to several sources it seems as thought Gallman made a statement during the fall and bowl practice that the starting job should be his. If Gallman continues his hard work, I see no reason why he shouldn’t be the starter when the Tigers travel to Athens in late August. At 6-1, 200 pounds, Gallman is the bigger back that Clemson has been looking for, but he also maintains the speed and shiftiness of a smaller back.

Chad Kelly
RS Fr. Quarterback
#11 6-2, 210
Buffalo, NY
View Full Profile ready to take over? Or will the nation’s top 2014 quarterback, Deshaun Watson come in and run away with the job.

Everyone assumes that the starting quarterback job is Watson’s to lose if he comes in and proves that he can learn the system, but I will pull a Lee Corso and say, “Not so fast, my friends!”

With an experienced offensive line, copious talent at running back and wide receiver and an improved defense, the Tigers simply need someone to operate the system and not make critical mistakes. And, that has Cole Stoudt written all over it.

Stoudt played in eight games last season and completed 47-of-59 passes for 415 yards and five touchdowns, while rushing 14 times for 58 yards and two scores.

Will he blow you away with his speed? No. However, he is just the type of quarterback that Clemson needs with young talent at the skill positions. He can put the ball where it needs to be and also use his feet when needed.