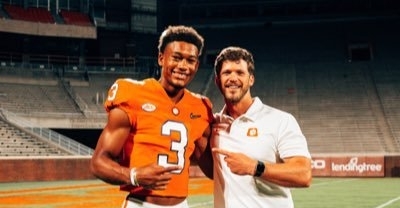 Noble Johnson poses with Tyler Grisham on his visit.

Noble Johnson says that Wide Receiver U is alive and well and he’s more than happy to help carry on the tradition.

Johnson is a 2023 4-star wide receiver out of Rockwall (TX) that chose the Tigers over other finalists Louisville, Ole Miss, Tennessee and Arkansas a week ago, giving his verbal commitment to the Clemson coaching staff.

Johnson showed up for the second day of head coach Dabo Swinney’s high school camp and earned an offer. That offer joined a list of 30 schools, including Miami, Texas A&M, LSU and USC. Johnson said his time on campus showed him that Clemson was the place to be.

“It is Wide Receiver U, most definitely. And it was just the coaches that stood out,” Johnson said. “It was the one thing for me, the character stood out and how they coached other kids and how Coach Swinney really took time out to coach me at the camp. It really meant a lot. And it's not about football. It's not about anything else. Just about them as who they are, them as people that really attracted me to Clemson and that helped me make the final decision.”

He knew early on what his decision would be, but wanted to take a few days and make sure he was making the right decision.

“I was sitting in Coach Tyler Grisham’s receiver room. He was just doing a slide show about the statistics of Clemson,” he said. “And he was just going through this stuff about how Clemson is basically the best statistically. And that's when I looked at my dad and I was about to ask him, hey, can I commit? But I was just thinking, what if I'm just feeling it because I’m here at Clemson? Then I gave it a few days and I was like, this is my place. I don’t need to visit anywhere else. I haven't even taken any official visits yet. I just knew that Clemson was the spot.”

“Oh, it was amazing. It was shocking at first,” he said. “I was like, this dude really walked up to me. I'm a nobody compared to him. And he really took time out, and that really meant a lot.”

“I knew this is my time. I wanted to commit,” Johnson said. “I called Coach Grisham first, and then I called Coach Swinney. He was mid-run. He was jogging around the campus and he stopped to take the phone call. And I was like, hey, Coach, I just might put a little pep in your step. I want to be a Clemson Tiger; I'm committing right now. And he just started running. He was laughing and screaming, saying, yes, and this and that.”

What else stood out about the visit?

“They said a good program should always be renovating everything. I know that's like a small detail, but it's cool knowing that I'm going to have something being built each year for my next four years,” Johnson said. “I might see some new stuff, like the locker rooms, the training rooms, and those are going to be dope. If you haven't seen the pictures, those are going to be crazy nice.”

Johnson said he knew that Nathaniel Joseph decided to de-commit, but he will spend his time working hard to land another wide receiver, and he knows the perfect place to find one – Texas.

“Well, yeah, I'll make sure they have another great receiver,” he said. “I’ll be the best non-recruiter recruiter they have. I have some people in Texas that could ball out and I think it will look good. I told Coach Grisham and you might hear some buzz about that soon.”