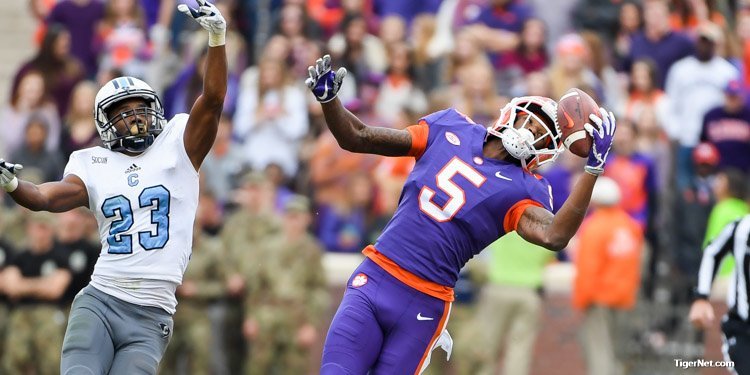 Tee Higgins will battle for a starting spot this spring

Clemson head coach Dabo Swinney often says that the best is yet to come, and despite the loss to Alabama in the Sugar Bowl recent events have put the Tigers at the forefront of the conversation when it comes to the 2018 season.

And, while spring practice is usually boring with very little in the way of storylines, I am looking as forward to this spring as any in recent memory. Why? Because there are jobs open on the offense and depth chart spots to grab on defense, and the Tiger faithful will get their first look at a bevy of talented recruits who are already on campus.

A quick, way too early look at the spring:

*Trevor Lawrence is on campus, and he will immediately vie for playing time with incumbent Kelly Bryant, talented veterans Hunter Johnson and Zerrick Cooper and redshirt freshman Chase Brice. Who gets the snaps and who winds up where will be the most talked about story this spring.

*Jeff Scott has to replace two starters in Deon Cain and Ray-Ray McCloud after both receivers declared for the NFL Draft. Can Tee Higgins take a starting spot? Can steady veteran Trevion Thompson earn more playing time? Amari Rodgers, Cornell Powell, T.J. Chase and Diondre Overton all have experience and are looking to break out. These battles are worth watching.

*The offensive line got a boost with the return of Mitch Hyatt but still has to replace the two guards with the graduation of Tyrone Crowder and the early departure of Taylor Hearn. Enter big-time recruit Jackson Carman, who can play either guard or tackle and will push for playing time. The right tackle spot was inconsistent last season, and the continued battle between Tremayne Anchrum and Sean Pollard will be at the forefront, while talented redshirts like Matt Bockhorst (who has drawn RAVE reviews since he arrived on campus), Blake Vinson and Noah DeHond get their first extensive look.

Add in veterans Cade Stewart and John Simpson and Gage Cervenka, and spots are up for grabs.

*Defensively, Brent Venables has to find a replacement for Dorian O’Daniel, who had a breakout season in 2017. There are plenty of linebackers on campus, but this might be a spot for Shaq Smith to earn playing time.

*The young defensive linemen will also be worth watching. Clelin Ferrell and Austin Bryant have announced they will return for a final season (even though, technically, Ferrell has two years of eligibility remaining, he’s just a rising redshirt junior), and veterans Chris Register, Richard Yeargin, Xavier Kelly, Justin Foster and Logan Rudolph (who played a few games before redshirting return). Add in the likes of Xavier Thomas and K.J. Henry, two of the top pass rushers in the nation in high school, and depth chart spots are up for grabs.

There will also be a logjam at defensive tackle, no matter what Christian Wilkins decides. Todd Bates and Lemanski Hall have their hands full this spring.

*The secondary loses starters Van Smith and Ryan Carter and veteran Marcus Edmond. Tanner Muse and Isaiah Simmons will likely start the spring as the starters at safety, while Mark Fields hopes to have a healthy season at corner. However, it’s easy to say that as of right now, there are no guaranteed spots in the back end of the Clemson defense. The spring will be a time to shine.

There will be other battles to watch next fall – kicker B.T. Potter and perhaps another offensive lineman or two, wide receiver Derion Kendrick and other talented players will be on campus and the position battles will start anew.

For right now, however, there is plenty to keep Clemson fans excited until the spring.