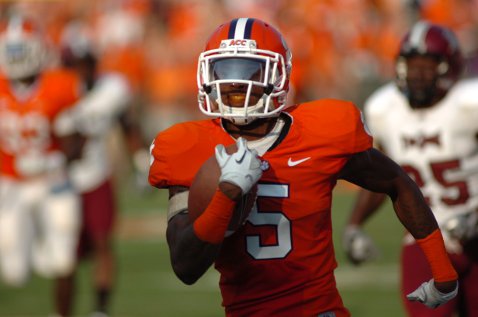 Sammy Watkins
Fr. Wide Receiver
#7 6-1, 200
Fort Myers, FL
View Full Profile , the freshman wide receiver who has taken the country by storm, is Bellamy’s roommate, and he said Tuesday that Bellamy is going to be fine.

Watkins said that the rumors surrounding Bellamy leaving the program are completely false.

“I have never, ever heard that from him,” he said. “We talk a lot, and he has never said that. That is the last thing on his mind. He is ready to play, and he doesn’t want to sit on the bench. When you come in, you want to contribute and you want to help the team.”

“I think there's a lot of structure here. A lot of discipline here," Swinney said. "No gray area. Sometimes that's difficult for young people to take on when your maturity isn't where it needs to be. That's part of the process. He's a good young man. And that's what this program is about - coaching life. It's not just coaching ball. When it's all said and done, if he'll stick with it, he'll leave better than he is right now. He's not there yet. He's kind of your typical freshman. The transition not as easy as some for others. He's a young player that wants to play more. Nothing wrong with that. I want guys who want to play more, but you have to earn it. He's really not a problem. We had a little deal the last week where we sat him down the first half.”

Andre Ellington
RS Jr. Running Back
#23 5-10, 190
Moncks Corner, SC
View Full Profile is the starter at running back, and Bellamy is currently splitting snaps as Ellington’s backup with D.J. Howard