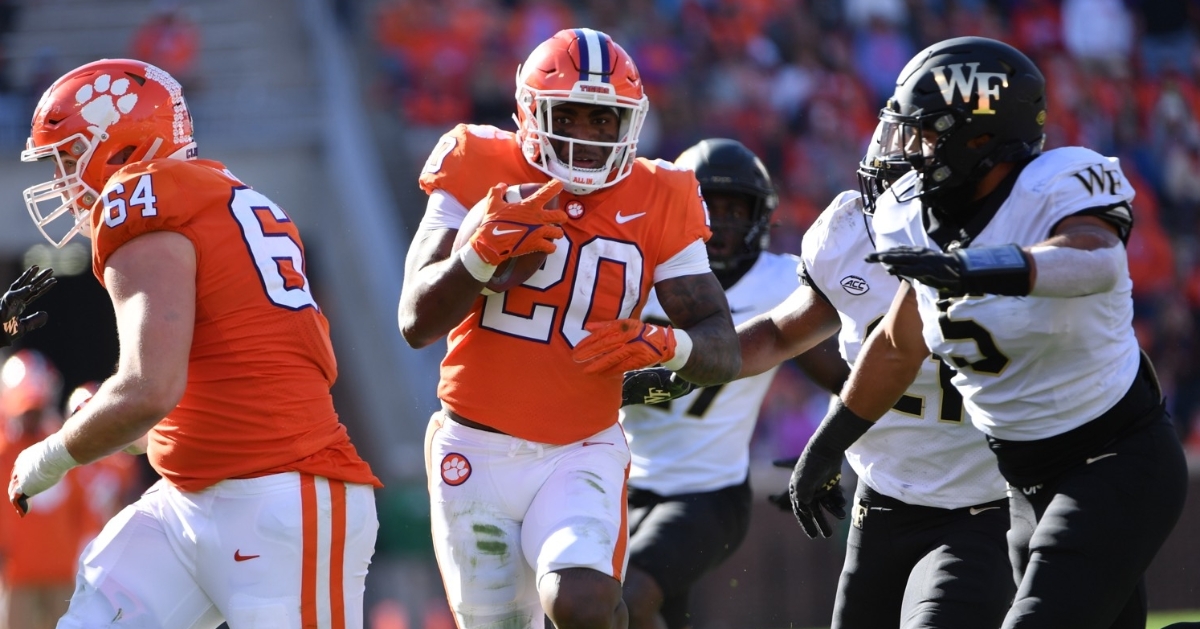 Dave Clawson has been the head coach at Wake Forest since 2014, and his teams have yet to find a way to beat Clemson, but the Demon Deacons will have as good a chance as any Saturday afternoon on the national stage.

Fifth-ranked Clemson travels to Winston-Salem for a noon matchup with No. 16 Wake Forest.

Clawson said this week that his 2022 squad is one of the best teams he's had as they try for the elusive win against the Tigers.

"I think this is one of the better teams we've had," Clawson said earlier this week. "You want to control what you can control, and this is one of our better teams. We couldn't beat Florida State for five years and couldn't beat NC State for four years [They beat both teams in 2021]. When I first got here, there were a lot of these storylines. Obviously, in the ACC Atlantic Division, this is the one we haven't got yet. But there's a lot of teams who haven't gotten them because they haven't lost a lot of games."

Having a top-five opponent come to Truist Field is a big deal, but Clawson said it's no bigger than the three games the Demon Deacons have played to this point.

"They're all big games. If you don't beat VMI, then it's a loss to an FCS, and the whole world is writing about that. Then you go to Vanderbilt; then it's that you couldn't match up against the SEC. Then Liberty comes to town, and you're looking ahead," Clawson said. "There's a different storyline for every game. Yeah, it's a really big game because they're in the Atlantic Division of the ACC. Clemson, for the better part of the last six-to-eight years, has represented excellence. It's a game in which we haven't played well.

"There are different reasons for it, but the bottom line is we haven't played well against them. I just want to go out Saturday and have our team play at the level they're capable of. That's what I want us to do. Let's play at the level we're capable of and control the things we can control. We know they're talented, gifted, and well-coached, but I think we have good players too. If you're a good player and a competitor, you look forward to these games.

"I think it's really cool that Wake Forest University at Truist Field is hosting this game of this magnitude that is a national game. Naturally, you want to get in these games, and it's taken a lot of work to do that. Then you want to try to find a way to win them."

Clawson also analyzed what he sees is a better DJ Uiagalelei and Clemson offense this season.

"They are much improved on offense and have nine returning starters," he said. "I think the quarterback is playing much better. He's completing more passes and has just one interception on the season. He's a threat to extend the play and run the football. I thought last year the game-changing play was when he escaped a sack twice and threw the bomb down the field. At that point, it was a 3-0 game, and that game made it 10-0. You can tell he's more comfortable, has a strong arm, and is a great athlete.

"Will Shipley is one of the elite tailbacks in the country. He averages more than nine yards every time he touches the ball. They have a great receiver group who make contested catches. They have four returning starters on the offensive line, and a lot of those guys are all-conference players. The left tackle (Jordan McFadden) is one of the very best in the conference."

Defensively, Clawson said Clemson is still one the best in the country.

"On defense, they've been the gold standard in the conference and really in the country for the last four-to-six years," he said. "It starts with the defensive line, where a lot of those guys are going to be playing on Sundays. They get people off schedule and have a great havoc rate. They go eight or nine deep and are that good and talented. If you look at the all-conference defensive line, probably half the players will be from Clemson. Trenton Simpson has become one of the best linebackers in the league. He can cover, rush, play the front and play the linebacker. He doesn't miss tackles and is great in the blitz game. His ability to go sideline to sideline is incredible. Their defense reads like an all-star team."

Clawson knows Saturday will be a challenge, but Wake Forest will need to be up to the task if they want to continue to elevate the level of their program.

"Every year, this is the most talented football team we play," he said. "They are extremely talented and very well coached. I like Dabo and respect him. He's done a phenomenal job of developing a program that has won double-digit games for a decade. They have been the best program in the ACC, and this is a matchup between the two of the most successful programs over the last six years in the ACC. They have the longest Power 5 winning streak in the country.

"Every year, this is a great challenge. But you know what, we wanted to come here and build a program to play in games like this. It's two nationally ranked teams. This is the highest-ranked matchup in the history of Truist Field. It's September. We want to play in big-time games, and certainly, our goal is to win them. That will be a great challenge with the caliber of program we have coming in here Saturday."

Check out the fifth edition of David Hood's TigerNet Podcast at this link or find it on Spotify or Apple Podcasts.