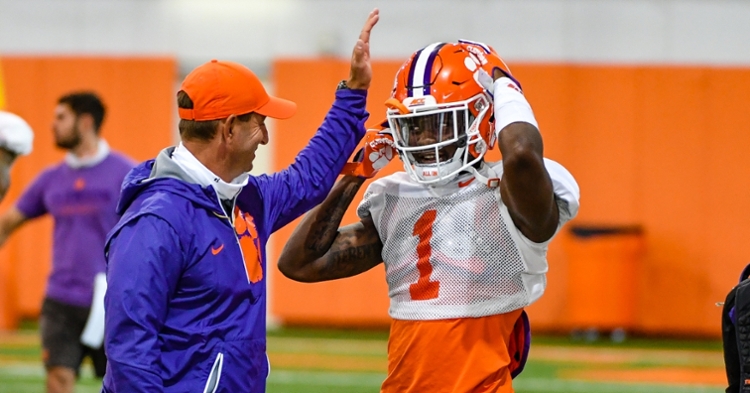 Conn says the freshman Andrew Mukuba was making his way up the depth chart before injury this spring.

The Clemson safeties group is set to have a breakout year in 2021, returning all pieces to the puzzle on a defense that ranked in the top-10 nationally in interceptions last year. Clemson safeties coach Mickey Conn knows that his guys could have a standout season led by super senior Nolan Turner and more veterans such as Lannden Zanders.

Last year Tigers head coach Dabo Swinney sung some high praises for his QB of the secondary Turner, saying he has a chance to become the best safety who's come out of Clemson during his time at the helm of the program. Conn agrees with his boss there.

“He’s definitely the best safety that's been here since I’ve been here,” said Conn. “He can do a lot of things, and that’s not to take anything away from the ones that I’ve coached, because they’ve done pretty good too. You’ve got K’Von Wallace, Isaiah Simmons and Tanner Muse. You’ve got some good ones that have moved on. Nolan has been here longer than all of them and he’s taken full advantage of his opportunity.”

One player who didn’t live up to some of the expectations set out for him last year was Zanders, who had some mighty big shoes to fill stepping in for the NFL first-round draft pick Simmons last year. Zanders was finding some consistency during the middle of the season before a torn labrum affected his play the rest of the year. Conn said Zanders is back and healthy and ready to step up even more in the secondary in 2021.

“Lannden will be back this year, I felt bad for him last year,” Conn said. “He had that shoulder injury and we decided to wait on surgery until the end of the year and it definitely affected the way he played the rest of the year.”

The junior from North Carolina recorded 34 tackles last season while also registering one sack and one forced fumble in the first half of the season before the shoulder injury sidelined him until the ACC Championship game. With the Troy Polamalu-like hair flowing out of the back of his helmet, Conn says Zanders is looking forward to leaving it all out on the field again.

“He went in and had shoulder surgery and missed spring ball,” said Conn. “He’s back 100 percent now. I’ve been talking a lot about it with him and he says he’s feeling great and ready to go. I’m expecting big things out of him this season.

A newcomer who stood out during spring ball was a mid-year enrollee true freshman in Andrew Mukuba. The six-foot safety from Texas was flying around the field during spring practice according to Conn before breaking his arm. Now that he’s healthy and ready to go for fall camp, Conn said he’s excited to see what he can bring to his position group.

“Mukuba had a really good spring,” said Conn. “I was really impressed with him. He came in as a mid-year and was actually climbing his way up the depth chart until he broke his arm. He definitely jumped off the page to us during spring practice. He’ll be ready to go for fall camp and can’t wait to see what he brings to this secondary.”

With more returning contributors such as Tyler Venables, Joseph Charleston and Ray Thornton in the safety group, this group should be ready to make the secondary a strong point of the Clemson defense this year.