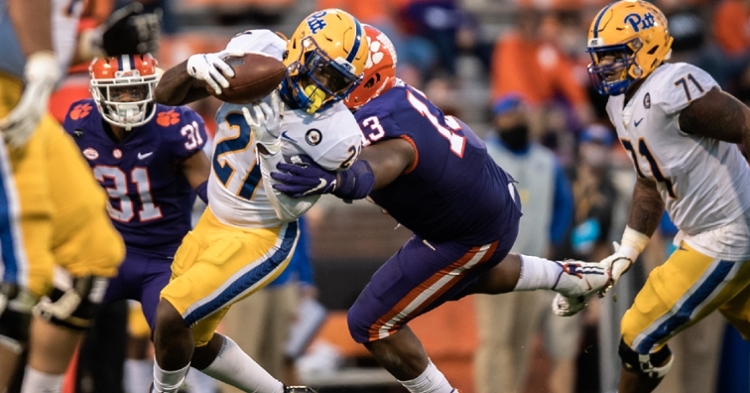 CLEMSON – Brent Venables spent the offseason and the spring not only making sure his defense has improved since last season, but also in making sure that his defensive line gets healthy in time for the season opener against Georgia.

Logan Rudolph quit football before the start of last season, KJ Henry played hurt, Tyler Davis missed time with injuries, Xavier Thomas missed time recovering from COVID, and Justin Foster missed the entire year and decided to retire. That’s a lot of veterans missing time, and getting healthy bodies ready for the season has been a priority.

That includes Davis, one of the best defensive tackles in the ACC.

"He got hurt early last year, came back and got hurt again in practice. And wasn't the same,” Venables said. “Coach (Todd) Bates did a great job of finding ways to get him better -- play quicker, more disruptive, more violent, more vertical, improve our pass-rush, win more one-on-ones. Bates has put together a great plan to get them better. Davis and Bresee have gotten a lot better.”

There are others who have caught Venables’ eye, including several who missed time.

"Cade Denhoff missed over half the spring, along with Payton Page. DeMonte Capehart missed more than half of spring after having a procedure done,” Venables said. “And Ruke Orhorhoro missed significant time. Orhorhoro is 310 pounds and can really run and is athletic. Just have to get him playing fast. He had the fewest amounts of snaps this spring next to Capehart. Really pleased with Denhoff, he's got a great get-off and motor. Lacks some functional strength right now. Over 240 pounds and 6-foot-5. Knows how to play the position. You don't have to teach it to him.

“Page has flashed. Mountain of a man. He's been really disciplined nutrition-wise and has lost some bad weight that he needed to. Coach Bates has him working on his weight every day. He's picked up some things. I'm excited about Payton, because he's showed up and he's worked. He's been a great teammate so far and has a lot of self-awareness. Really pleased with him. Tre Williams is another guy that has missed significant time this spring, but we're expecting great things from Tre. When he's been in there, he's been disruptive, twitchy, athletic. Has a lot of refinement still to do.”

Venables said he was pleased with the play of the line this spring.

“We had 21 sacks inside and 25 outside this spring (at defensive line). Some of its pressure generated. But they've made some improvement that way,” he said. “We've worked really hard on their pass-rush. Really hard. The biggest thing for our defensive line is getting more physical and winning more one-on-ones. Last mini-scrimmage, we forced four turnovers and guys were making plays on the ball.”

The linebackers have also flashed.

“I was really pleased overall with the linebackers this spring. Saw Trenton Simpson get better and really start to mature. He's cross-trained,” he said. “Cross-trained Keith Maguire and Vonta Bentley too. Bentley has had a really good spring, but he's got to be more consistent in both coverage and tackling. Maguire and Kane Patterson have had good springs. It's a group of leaders. Sergio Allen has had a good spring, cross-trained him at multiple positions. Just have to get him to play with confidence."

"Had an excellent spring. Shows instincts, physical toughness, good fundamentals and technique. Really has been sharp mentally,” Venables said. “A lot like (Andrew) Mukuba-- they're actually roommates. Whatever they got over at Apartment 1A is the right stuff. He's had some moments where he hit the wall and his grades overall are nothing to write home about, but his production has been really good. When he gets come things cleaned up, he has a great future. He's got the right stuff.