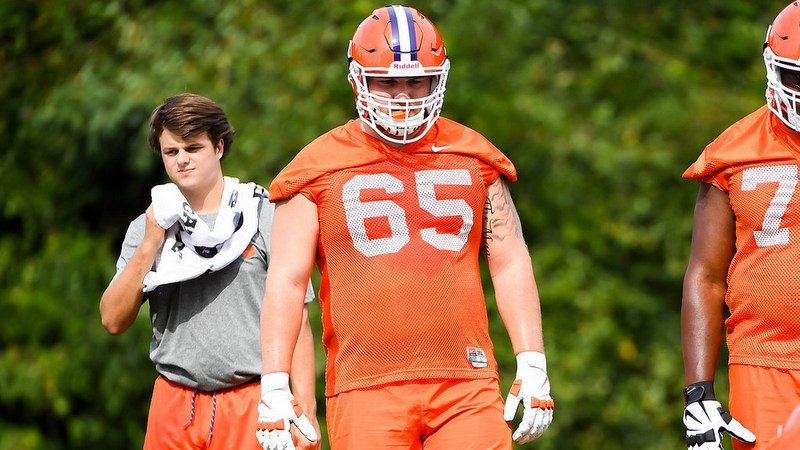 CLEMSON – Offensive lineman Matt Bockhorst grew up in Cincinnati in the shadow of the Ohio State-Michigan rivalry, so he understands the bitterness that can exist between two fanbases. It wasn’t until he got to Clemson, however, that he truly understood the hate that exists between the Tigers and the Gamecocks.

No. 3 Clemson (11-0) travels to Columbia next weekend to take on South Carolina (4-7) in a rivalry that has been dominated by the Tigers in recent years. Clemson has won five in a row in the series and looks to make it six at noon (ESPN) in Williams-Brice Stadium.

Bockhorst now understands that the rivalry means to the people of South Carolina.

“Oh yeah that was one of the biggest things coming down here, I didn’t really understand the rivalry,” Bockhorst said. “I just had never been around it and I had grown up around the Michigan vs Ohio State rivalry and I was never really a fan of either of those schools.

“But coming down here and really being immersed in it, it is a big deal and it really matters. Especially for the guys who grew up in South Carolina, there’s definitely a sense of urgency this upcoming week.”

Bockhorst doesn’t have to look any further than teammate Gage Cervenka to understand exactly what the rivalry means – Cervenka grew up a Clemson fan and dreamed of the day he would play against the Gamecocks. It's a game he wants to win for his teammate.

“Coach (Dabo) Swinney always reminds us that Gage growing up was a lifelong Clemson fan,” Bockhorst said. “Like I said, for those guys in-state, it does mean a little bit more. I remember talking to Taylor Hearn and it was a big deal for him too. With Gage being a fifth-year guy and leader on this team, you really want to go out there and perform well so he can have that pride of never losing to South Carolina.

“Obviously we take pride in that too, but it just means a lot to him and his family growing up and really seeing the program in stages when it wasn’t a national title contender. Being able to stick with it and see where this team has gone is really special for guys like Gage.”

By the time the game kicks off next Saturday, Bockhorst and the Tigers will have had two weeks to think about the game, about improving to 12-0 and about beating their rival. Clemson defeated Wake Forest last time out and has an open date this week before finishing the regular season with the rivalry game.

“It’s definitely unique having two bye weeks. I don’t think it’s something any of us have experienced before,” said Bockhorst. “It’s kind of nice to have. Heading into our last bye week we squeaked one out against North Carolina, so it was definitely much needed. I think this is very valuable for the team as well, getting two weeks to prepare for South Carolina and just get the team healthy.”