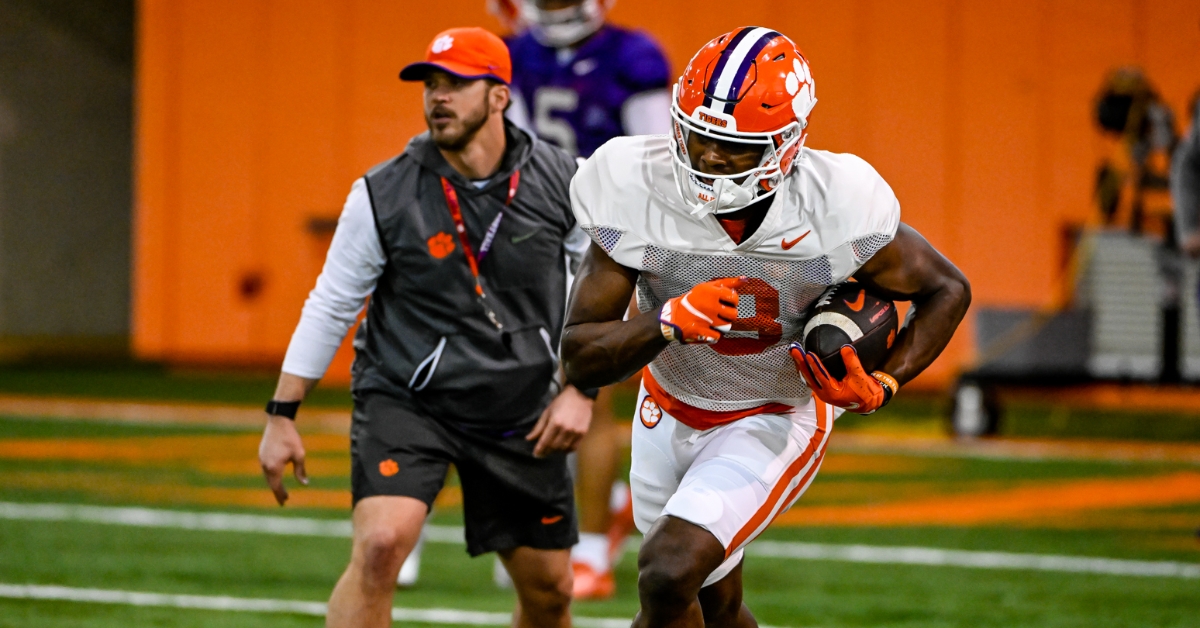 Tyler Grisham is looking for a big year from his receivers.

Tyler Grisham is fiery and competitive, traits that served him well as he went from an unheralded prospect coming out of high school to playing in the NFL, so it’s hard for him to admit he failed. But he did just that recently, saying he feels like he didn’t go a good job with his receivers group last season.

The 2021 offense was forgettable in many ways, and not just because of the receivers. There were quarterback issues, running back defections and injuries, tight end injuries, and offensive line woes that lasted all season.

The Tigers finished 13th in total offense in the ACC, just ahead of woeful Boston College. Clemson finished 99th nationally in total offense, averaging just under 360 yards per game. You have to go all the way back to 2010 to find a season when the Tigers struggled offensively in such a manner – they averaged 334.5 yards per game that season, which led to the firing of then-offensive coordinator Billy Napier.

In 2021, Clemson’s leading receiver was Justyn Ross (46 catches), but he barely broke the 500-yard mark (514). Joseph Ngata (438) and Beaux Collins (407) were the only other receivers to crack 400 yards. Ross, Collins, and Davis Allen each had three touchdown receptions, tops on the team.

Injuries played a major role in the lack of success, as did players having to play out of position.

“It was frustrating for my guys and having to move guys around and maybe play them in some areas that maybe didn’t suit them in their skill set as well,” Grisham said.

That made Grisham, ever the competitor, fired up for the start of spring practice.

“I learned a ton in that situation,” said Grisham, who is entering this third season as the Tigers’ wide receivers coach. “I failed in plenty of areas, and I had to swallow that pill. As a young coach that’s learning the profession every day, I really got a crash course last year. And I was so eager heading into mat drills and spring practice to get back out here. I just want to get back on the grass and fix some stuff. And so there's a lot of excitement and I think a lot of humility from some of that failure, but being eager and hungry and excited to go and improve it.”

Grisham was asked in what ways he feels like he needed to improve.

“Just in the way in coaching and communicating a couple of things, teaching, reevaluating how I taught a number of things,” he said. “I think for me it is learning the balance of challenging your guys and loving them at the same time. And that relationship and some of the glaring things and some of the emphasis we have is all right, okay, perimeter blocking. Okay, that was an issue at times and again, I think some of that comes back to personnel and having some guys in some areas that maybe they didn't suit them as well, because we had to.

“(The personnel) is not an excuse, but for me and that emphasis, I’ve made that more of an emphasis on the field in my individual drill work. I’ve made that more of an emphasis in my meeting room, spending more time and showing them more looks and really making sure we feel good about our perimeter blocking. And our spot blocking where you don’t have a defender necessarily, but you have a spot. And knowing coverage and who to pick up depending on coverage and who shows up to that spot. Those are things I’ve really worked on.”