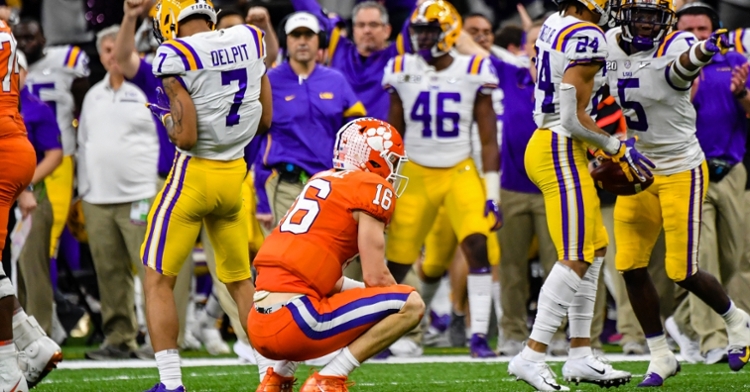 Trevor Lawrence reacts to a late turnover against LSU.

Trevor Lawrence has faced very little adversity during his football career, but the one loss he’s suffered in college still sticks with him nearly a year later.

Clemson’s star quarterback and Heisman Trophy finalist only lost two games in high school and his only loss as a Tiger came last season in the national championship against LSU. As Lawrence prepares to return to the Super Dome, he’s still learning from the mistakes last January.

Lawrence told the media during Tuesday’s Sugar Bowl press conference that he learned more about himself during and after the loss to LSU than he has from any victory.

“What could have been. It would have been cool to have the opportunity to not lose a game in college but I think some things are necessary for you to grow,” Lawrence said Tuesday. “You’ve got to face a little bit of adversity and sometimes you’re a little bit blinded by success if you don’t have any hiccups along the way. I think for us [Clemson] and for me personally, it was good for us to not win that [CFP National Championship] game in a lot of ways. Obviously, you want to win a National Championship and it’s definitely devastating in the moment.

“After that, I think we have gotten a lot better. I learned a lot about myself. There’s a lot of things I needed to work on to be a better player. I think leading in times when things are harder, when you lose a game is definitely harder than when you’re winning. So, it taught me a little about how to lead better. Just all those things. I think we kind of needed that [loss] and at the end of the day we don’t want to take winning for granted. We win a lot around here, and it’s easy to forget how hard it is to win when you win so much. I think it taught us a lot and I think we [Clemson] took that next step as a program and team because of that. Obviously, you don’t choose losing going forward but sometimes it’s better for you.”

Lawrence knows he will never be perfect on the field, but with the help of quarterbacks coach Brandon Streeter, he strives to be the best he can be during every practice and every game.

“That’s part of every week. The process is evaluating the game and regardless of how well I played, there’s always something I can get better at or there’s something that I missed. Whatever it may be,” Lawrence said. “That’s the thing I love about Coach [Brandon] Streeter, quarterback coach, is that he’s pretty hard on me but in a good way. He wants me to be my best and he’s not going to let anything slide. So, he holds me accountable and I also expect a lot from myself. I go in there [my mind] and those are the main things I’m looking at. What I can get better at. Obviously, the good stuff is expected to a certain degree but I’m just looking at what I can get better at.

“I have obviously had a few turnovers this year and definitely made an improvement from last year. That was one of my main goals. I’m just realizing that nobody’s perfect and it’s [struggles] going to happen. I’m just focused on playing my game, to play comfortably, and if there’s going to be a few turnovers then it’s just part of the [quarterback] position. I’m just staying confident and not letting that get in my head and I’ll keep playing my game and not really changing. But, learning for sure from some of those ill-advised throws and throws that could’ve been picked off and ones that were then just learning how do I get better from that. Every week I can do that.”

No matter what happens Friday night against Ohio State in the Sugar Bowl, Lawrence hopes people remember him more for what he’s done off the field than on it.

“I haven’t necessarily thought about what my legacy would be. I have been trying to live in the moment these past three years and trying to be the best I can be whatever moment I’m in,” he said. “So, that has been my mindset and I think that helps you leave a legacy if you just try to live and be your best in every moment. At the end of the day, I just want people to say, I want people to speak to my character more than the type of player I am or was. I want to just be a good person, and I think that’s the number one goal for me. Obviously, the play and all that stuff, all the accolades, kind of will eventually speak for itself. But, that is really not the main thing for me. It’s just being a good person and being a good teammate. I hope that is what people say about me when whenever I leave here [Clemson].”