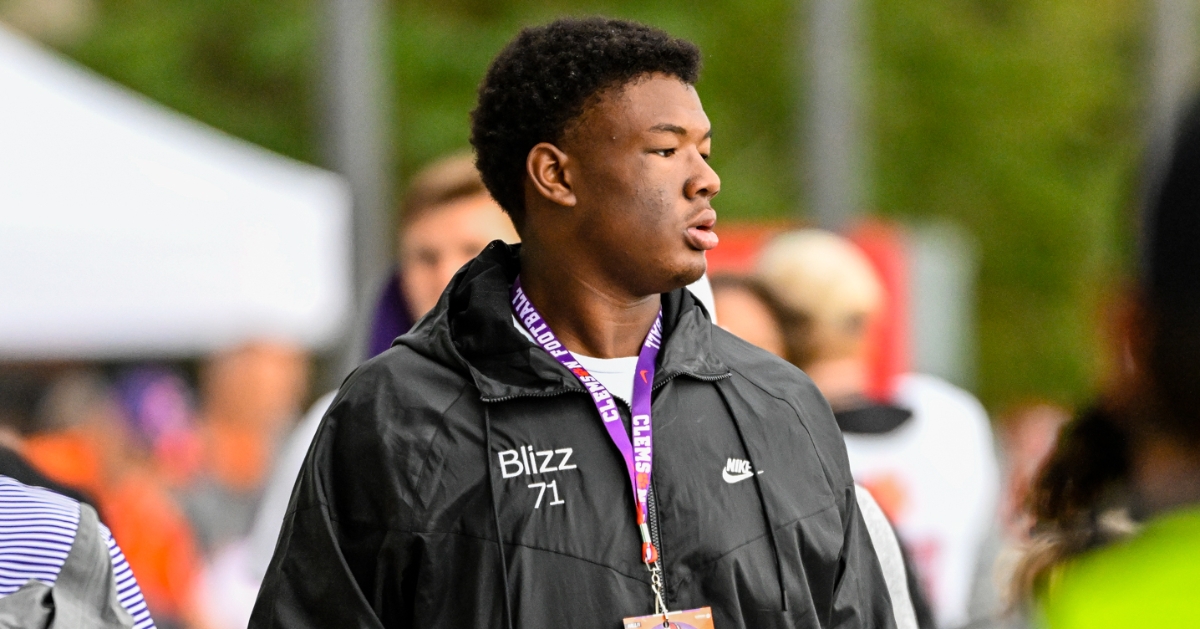 Blake Franks is a local prospect regarded as a 4-star offensive lineman.

One of Clemson’s top offensive line targets is getting closer to a decision, and he’s taking two trips to Tigertown in January.

Greenville (SC) Greenville High OG Blake Franks (6-5 310) is a 2024 prospect that is just a few weeks away from making his decision and it’s definitely looking like a two-horse race at this point between Clemson and South Carolina. Franks visited Clemson last Saturday for the basketball game, and he is headed to Columbia this weekend for their junior day and he will return to Clemson January 28th for their junior day.

“Right now, they are standing out the most to me,” Franks said of the two in-state schools. “They are definitely my top two. It’s still up in the air right now.”

Last Saturday Franks and his mother turned up at Littlejohn Coliseum as the Clemson basketball team took on Duke. Offensive line coach Thomas Austin and Senior Director of Recruiting Jordan Sorrells, himself a Greenville High grad, were there, as was new offensive coordinator Garrett Riley.

“I got to meet Coach Riley for the first time,” Franks said. “That was very cool. He’s a cool guy. I’m actually going to go back down there for the junior day, so hopefully I’ll get to talk to him some more. I learned a lot more about Coach Austin in person. I realized I didn’t know as much about Coach Austin that I thought I did. Talking to him about some things that’s not football is very interesting and very fun in my opinion. And my mom spent the whole time talking to Coach Sorrells.”

Besides meeting up with the coaches and watching the Tigers beat Duke, Franks said the visit gave him greater insight into what life as a Clemson student might be like.

“It gave me like a deeper dive into what I would be experiencing as a Clemson student,” Franks said. “I got to experience what it was like being a student somewhat, like what they might do for fun. That was something I really enjoyed. I got to talk to a lot of a lot of the players as well. I got to talk to Cade (Klubnik) and to one of my former teammates Josh Sapp.”

Franks also got more information from Austin about how he would fit into his future offensive line plans.

“They have me fitting in right now as a guard, so does South Carolina and a few other schools,” Franks said. “I think Auburn has me fitting in as a tackle actually, but I guess we’ll see where I go in college what happens.”

Franks said he’s looking at sometime in mid-February for a commitment announcement, and he realizes it’s going to be a tough call between the Tigers and Gamecocks, and anyone else who might jump in late.

“There’s a lot of plusses that I have when it comes to South Carolina,” Franks said. “There’s also plusses that I have when it comes to Clemson. I think I came down to those two, but then you’ve got schools that are still interested in recruiting me, which I’m completely fine with. Like Auburn, Coach (Jake) Thornton still talks to me a lot and is trying to get me to come down there. I’m all down for it but right now it seems I’m booked up. But I’m definitely down to talking to Coach Thornton. I’m definitely down to talk to any coach for real if they are looking to recruit me as a player.”