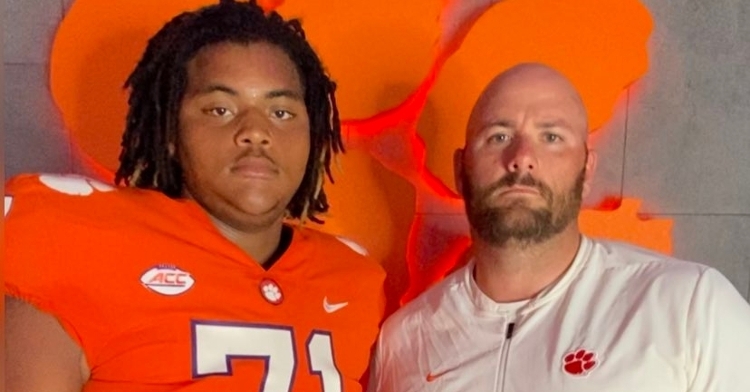 One of the top offensive line targets for the 2023 recruiting cycle made his way to Clemson last Saturday night, and he found himself at the top of the Hill for the most exciting 25 seconds in college football.

Joshua Miller (6-5 315) is a 3-star prospect out of Colonial Heights (VA) Life Christian Academy who was back in Clemson Saturday to see the Tigers take on Boston College. Miller also made a visit in June, so this visit gave him the chance to reconnect with offensive line coach Robbie Caldwell and to meet head coach Dabo Swinney and assistants Brent Venables and Brandon Streeter.

Miller said his group arrived too late for some of the pre-game activities. He did get the chance to walk around on the field, and with the other recruits, he was taken up to the top of the Hill to meet the team as they got off the buses.

“We got there, and all the fans were screaming loud and excited, getting their phones out and recording,” Miller said. “Everybody was screaming players names, coaches. You see Dabo run out first and then you see all the players come behind him. It was a crazy environment. Then, when the players ran down the Hill, it got louder, and you had the fireworks going and the jets flying over. After that happened, the coaches had to take us back to our seats, so we had to run thru the crowd of fans to get back to the seats. At that point, I was a little tired, I’m not going to lie to you. But overall, it was a good time. It was crazy. It was fun. I enjoyed it a lot.”

Miller kept an eye on the Tigers’ offensive line during the game, and he thought those guys did an excellent job.

“The run game, they were just destroying the D-line,” Miller said. “They ran for two hundred and I believe they passed for two hundred, too. The QB didn’t get touched once. They played great. I could see myself fitting in with Clemson. They run the same offense that my high school runs, run-heavy and get to pass every now and then, quick screens and bubbles. It’s a playing style that I’m already playing in, (so) coming to Clemson, I’d fit in pretty well.”

After the game, Miller made his way to the locker room where he mingled with the players and the coaches.

“I talked to coach Dabo for a brief moment,” Miller said. “He was telling me to keep doing good on and off the field, and they want me there. I’m a player that they like, and they want me. Then I talked to coach Venables. He was telling me about the Clemson culture and how they are family established and all that. It gave me a different view on just not Clemson as a team, but the whole offer gave me a whole different meaning for it.”

This season, Miller also has been to Virginia Tech. He might be at Tennessee this weekend, and he is set to visit Penn State October 23rd. Some other schools high on his list are Virginia Tech, Florida State, Arizona State and North Carolina.

November 2nd is the anniversary day of the death of Miller’s father, and he talked about making an announcement of some type on that day. It could be a public commitment, or it might be something else.

“It’s possible for a decision coming soon, but at the same time, I still want to wait it out a little bit,” Miller said. “I think I’m going to take a little more time to wait it out, but it still could be soon. Nothing is set in stone. I do have a plan for November 2nd. It’s between two options right now. I’m just putting it in God’s hands right now, to be honest.”