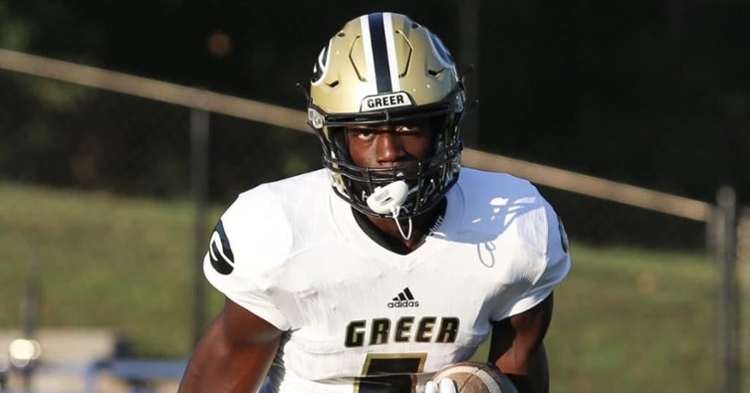 Skinner loved what he saw at the Clemson spring game.

Jaleel Skinner used his spring break to think about things, including his future as a college football player, and he came away with a clearer picture of how he wants the rest of his recruiting process to play out.

Skinner is a 4-star tight end prospect out of Greer (SC) who has offers from schools like Clemson, Alabama, Florida, Florida State and South Carolina. Skinner got away from it all last week with a spring break trip to Lake Marion. Soon he’ll be ready to immerse himself again in the recruiting process, and that means official visits this summer and fall. Skinner said Arizona State, Oregon, Texas, Oklahoma and Florida State are some of the places he’s looking at. In fact, he wants to schedule Florida State the weekend of the Notre Dame game.

Skinner has had a short list of Clemson, Florida, Miami, Georgia, Auburn, Virginia Tech, Tennessee, Michigan, Oregon, Florida State, LSU, Arizona State, Texas and Oklahoma. He did not make it to the Clemson spring game because he had a track meet, but he did watch it on television with a focus on the tight ends and what new position coach Tony Elliott was doing.

“I watched the spring game and I loved it,” Skinner said. “Loved the tempo. Loved some of the new faces they’ve got there. Loved how they catch the ball and get up and down the field. I think they did a really good job of getting the ball to them (tight ends). The way coach Elliott called the plays was great.”

Skinner said he talked with Elliott last week and he was just checking in with him. South Carolina has not been a strong factor with him since the coaching change though he said he received some text messages from head coach Shane Beamer last week. Clemson, Florida, Florida State, Texas and Oklahoma, Skinner said, are schools being most consistent with their contact.

An official visit to Clemson, Skinner said, is not something he feels the need to schedule since he can get their so easily down I-85. But he does plan to visit for the Elite Retreat the weekend of June 11th.

Skinner said there is no clear favorite for him at the moment, and he’s not sure when he’ll make a decision.