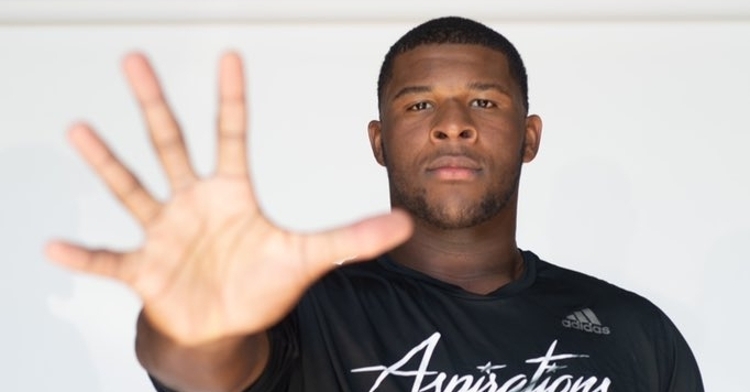 Goodwin says he's the top tackle on Clemson's board.

Clemson has reeled in a pair of offensive linemen in the 2022 class, securing commitments from Blake Miller and Collin Sadler. Another offensive tackle recently released his top schools, and Clemson remains high on the list for the 4-star prospect.

Charlestown (Indiana) offensive tackle Kiyaunta Goodwin released his top-13 schools on February 27th, with Clemson joined by Alabama, Arizona State, Florida State, Indiana, Kentucky, Louisville, Miami, Michigan, Michigan State, Ohio State, Oregon, and USC. The 6-7, 300-pound 4-star picked up a Clemson offer on the same day he released his top schools, and the Tigers look to be one of the lead schools in Goodwin’s recruitment.

Goodwin’s recruitment has been led by offensive line coach Robbie Caldwell and offensive coordinator Tony Elliott. Caldwell and Elliott have both relayed the same message to Goodwin that he is the top tackle on the board for the ’22 class.

“(Caldwell and Elliott) told me I’m the top tackle on their board and they want to make me a Tiger,” Goodwin told TigerNet. “I really like coach Caldwell. He’s really down-to-earth and honest. We had been talking for a while and there were some things I needed to do academically. Once I handled that part, coach Caldwell made the offer to me with coach Swinney on the phone.”

At 6-7, 300 pounds, Goodwin is the prototype for an offensive tackle. What does the Clemson staff like about Goodwin on the field?

“They said they love my length and athletic ability,” Goodwin said. “They feel like I’m a true tackle. My strength is my mentality. I feel like I’ve got a lot of work to do. I’m going to keep outworking everyone.”

Goodwin is hoping to make a visit to Clemson soon, and so far he likes what he has learned about the Clemson program. What is Goodwin’s plan for his recruitment moving forward? And what will he be looking for in each school?

“Hopefully before the season starts,” Goodwin said of his plan to announce a commitment. “I love Clemson. I really like the way the culture appears to be there. I’m excited to get on campus and see things there. I feel like Clemson would be a good fit, but I need to get around the staff and meet the players. I want a coach that can develop me and a plan for my success in the classroom.”

Goodwin has worked hard the past few years to transform his body, going from 425 pounds to now being listed at a lean 300 pounds. Goodwin’s work ethic has translated to him being one of the top recruits in the country, and he plans on continuing that once he steps onto a college campus.

“Someone who will work tirelessly to get better both on and off the field and solidify the left tackle spot,” Goodwin said of what a school will get from him.