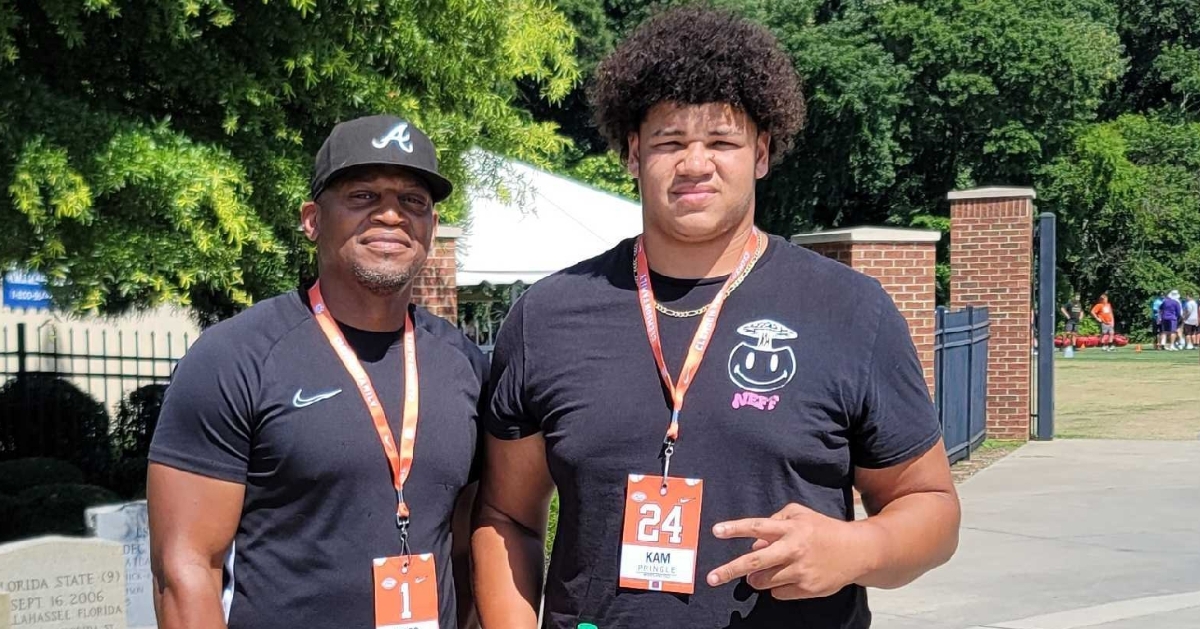 Pringle and his uncle pose at Clemson's camp Saturday.

One of the state’s top prospects for the 2024 recruiting cycle was back on campus this past weekend for head coach Dabo Swinney’s high school camp, a visit that let him get a little bit more of an inside look at the Clemson program.

Kam Pringle (6-7, 330) might be the most coveted prospect in the state of South Carolina. Out of Dorchester (SC) Woodland, both in-state schools are all over his recruitment. Pringle was offered by Clemson on the first day of June. Pringle has an impressive offer list that includes Ohio St., Auburn, Florida, Florida St., South Carolina, Georgia, Michigan, Michigan St., Tennessee, Texas A&M, and Virginia Tech. He is ranked as the No. 7 offensive tackle nationally by 247, number one in the state of South Carolina. He visited Auburn last weekend.

Pringle didn’t work out at Clemson’s camp and instead spent more time with the Clemson coaches, and after the visit detailed what he thought about the visit and the offer.

Austin called with the offer on the first day of June.

“It was exciting. It was something I’ve wanted for a long time, since I started the process,” Pringle said. “It’s verification for me that all my hard work is paying off. It was a great feeling. It was a great experience. He (Austin) told my coaches to tell me to call him, so I called him, and I didn't realize it was about the offer. And if I did, I forgot that June 1 was supposed to be the day things changed. He called me and caught me a little off guard.”

What did he want to accomplish this past weekend?

“Just feeling out the program,” Pringle said. “Hanging out with the coaches, going to meetings, just being on campus and feeling out the vibe. I’ve been up there multiple times. I didn't take a campus tour. I just walked around the facility a little bit. I've been up there so many times, I can kind of tell you what's on campus. So it's really just getting familiar with stuff and warming up and getting to know everybody.”

Pringle will visit Tennessee and Kentucky later this month, but he already knows where Clemson stands.

“They are definitely in my top schools. They're definitely top ten, if not top five contenders for me right now,” he said. “As long as things keep going the way they're going, they're going in the right direction. Clemson definitely has a great shot now and in the future.”

However, the Gamecocks will prove to be a tough out.

“South Carolina is, of course, a top three school. They've done their part in recruitment and make sure they always kept up with me and make sure that throughout the very complicated process to where they can't call and they can't just text me, they still put forth effort into making sure we stay in contact,” he said.