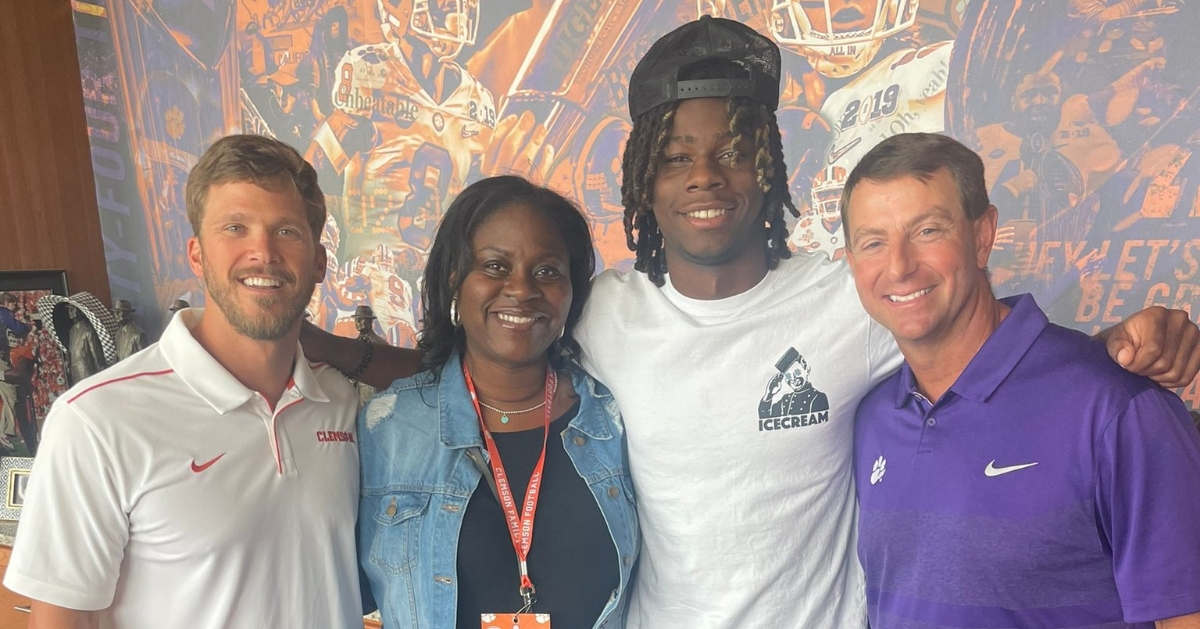 2024 WR James Madison II and his mother pose with Grisham and Swinney.

One of the top receivers for the 2024 recruiting class stopped in Clemson over the weekend, and he came away impressed with everything he was shown.

James Madison II of Fort Lauderdale (FL) St. Thomas Aquinas has been touring several of his top schools this summer, and this past weekend was a chance for Madison and his parents to see what Clemson has to offer.

“We made it up to Clemson and we did a tour of the school,” Madison said. “We met with Coach (Dabo) Swinney and we met with Coach (Tyler) Grisham, the wide receivers coach. We sat down and we looked at film and they showed me how they could use me. We pretty much did the whole thing."

Why did Clemson receive a visit?

“The main reason I visited Clemson was because of the relationship I have with Coach Grisham,” he said. “I just feel like he really wanted to get me out there and he wanted to be able to show me and wanted me to see where I would be and how I would play for them. We just had to make the trip out there.”

“He said I will probably get one, but I know how they are with offers,” Madison said. “But he said I am one of their top guys, so that will probably be coming soon. Right now I am not worried about that. Right now, I am just worried about the season and stuff. We are going to be in contact and still communicating, so I am looking forward to building our relationship.”

The visit resonated with both Madison and his mother.

“My mom loved everything about it, how they’re built, how they're building men over there and how they really take that seriously,” he said. "But I love the campus. I love the coaching staff, but not every top school is like that. You really get a genuine feel from the whole coaching staff. But I felt wanted and welcomed very from everybody there, and that was really probably the one of the main things for us liking it.”

He has also visited Tennessee, Oregon, Florida State, Tennessee, and Oregon, but is no hurry to make a decision.

“I don't have a leader right now, but I'll probably be looking to slow that down,” he said.

The 6-3 target described his style of play as a playmaker.

“I would say my strengths are that I'm a playmaker. That's probably how you could describe me. I take the top off, I go deep, but also I'll take a slam or screen for 90 yards,” Madison said. “So I give you a little bit of versatility and you can't really box me into one description. And probably what I need to work on is just I always try to improve. So just little things. Just little details, little things in my route running and finding different ways to do things, just little stuff like that. I feel like I just need to be a better player.”

Madison said he is already making plans to return for a Clemson game this season.