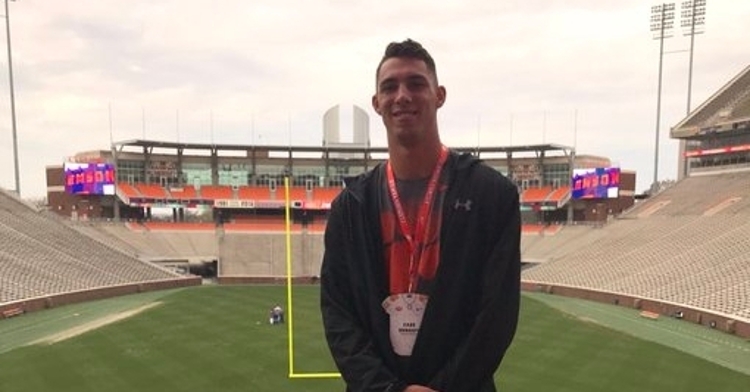 Cade Denhoff poses on top of the hill at Clemson

Cade Denhoff made his first visit to Clemson since attending head coach Dabo Swinney’s camp in June and being back on campus got his full attention.

Denhoff – the No. 47 ranked player in the country according to 247 – made his first stop in Clemson in June of 2018 for head coach Dabo Swinney's high school camp. He returned to campus to see Clemson defeat South Carolina in November and was on hand for another visit in March. Clemson offered when Denhoff made a return visit to Swinney's camp this past June

Accompanied by his family, the 4-star 2021 Lakeland (FL) Lakeland Christian defense took in the sights and sounds of Clemson’s homecoming game against Boston College last weekend.

“It was a good time. It was me, my parents and my sister,” Denhoff told TigerNet this week. “We were up there for camp in June, so it was good to be able to come back and visit with the coaches again and meeting Coach Swinney and just being able to hang out more and seeing all the facilities. One of the cooler parts was being in the locker room pregame and then being up at the top of the hill at the rock when they ran down. That was pretty cool.”

Being in the locker room pregame, Denhoff said everyone in the room was tuned when Swinney spoke.

“I would say that he's got a subtle aggressiveness,” Denhoff said. “I've seen some coaches that are really, really fiery. He's fiery and gets excited but it's more subtle. I think everybody knows that when he's speaking before the game, it's time to get locked in. He's all the time pretty jovial.”

After the game, Denhoff spent time with Swinney covering a wide range of topics.

“Just kind of talking about me a little bit. He said he likes my motor,” he said. “He likes how tall and rangy I am as a defensive end. He says they like me a lot and they're going to continue to recruit me hard. He then told me about what makes Clemson special and talked about recruiting going forward.”

Denhoff was able to see a Brent Venables led defense at his best last weekend when Clemson held Boston College to just seven points and held All-ACC running back A.J. Dillon in check for most of the contest.

“I've gotten to know Coach Venables over the last year. I love the way he coaches,” he said of Venables. “He does a great job with the defense. He makes them step up, he mixes blitzes up. He puts players in different positions such as Isaiah Simmons. He's such a versatile player and Coach Venables really knows how to work him in different situations and at different positions to have a good outcome. He really knows how to mix up the defensive line to get them to do certain things and continue to get pressure on the quarterback and tackles for loss. He does a great job out there.”

Denhoff has 24 offers from all of the major players in college football including Alabama, Florida, Florida State, Michigan, Nebraska, Notre Dame Ohio State, and Penn State among others. However, Clemson would be at or near the top of the list if he were to release one today.

“I haven't made any lists yet or made any favorites. They're obviously a school that I'm heavily interested in and like a lot,” he said. “If I did make a list, they'd be up at the top of it, for sure. It's just the culture of their program and the way they do things. Obviously, they're winners but they do it in a humble way. They're really exciting and aggressive to watch. They play physical football. It's mostly their culture and the family atmosphere and the way they play.”

Denhoff tallied 95 stops, with 6.5 being sacks and caused three fumbles in 2018.

Not much time to throw when 2021 four-star DE Cade Denhoff (@cade_denhoff) gets in the backfield this quick pic.twitter.com/ASs168BybU