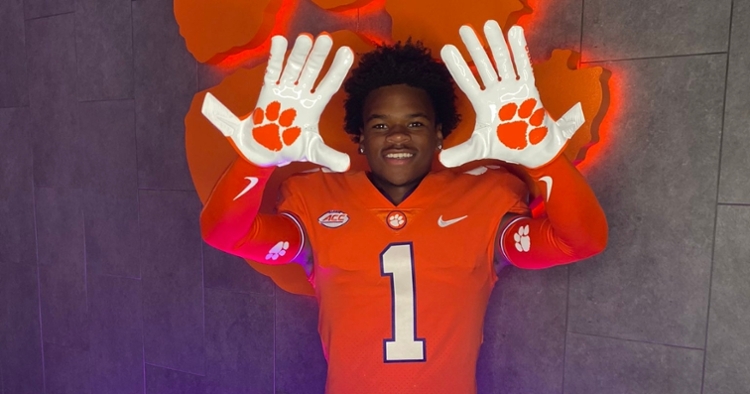 Nation shows off Clemson gloves during his visit.

Clemson has identified their priorities at cornerback for the 2023 class, and an unofficial visit earlier this month ended with an offer for one of those targets.

Ethan Nation visited Clemson on June 4th, and the 4-star cornerback from Roswell (GA) added Clemson to a list of over 40 schools to offer the elite cornerback. Nation is familiar with the Clemson program and the football atmosphere because of his sister, who is a former Clemson Rally Cat. Nation is now one of the top targets for Clemson in the ’23 class, and the visit provided Nation to experience the Clemson culture up close.

Cornerbacks coach Mike Reed has handled the recruitment for Nation, and the offer at the end of the visit came as a surprise.

“So, he just offered AJ (Harris) and me at the end of our visit. It actually came out of nowhere because I wasn’t expecting the offer when I was up there,” Nation told TigerNet. “I was expecting to have to camp to get the offer. But me not having to camp was really cool. It came out of nowhere and I was kind of lost for words.”

Nation hopes to return to Clemson soon for another visit, and he also could potentially be in attendance for the Clemson-Georgia season opener in Charlotte. The unofficial visit provided Nation with the chance to learn more about the staff and program, and he was impressed by the Clemson culture.

“I just love the culture. I just love how everyone around -- no matter if you are a coach, a player, or just a student -- everyone is so close to each other,” he said. “Just that family culture stood out to me.”

Clemson has now offered four players designated as cornerbacks by recruiting sites, with Nation and Avieon Terrell, Tony Mitchell, and AJ Harris all being targeted for the ‘23 class (athlete offers Moussa Kane and Joenel Aguero could also play CB). How does the Clemson staff see Nation fitting in the Tigers’ secondary?

“Coach Reed said that we would fit their scheme perfectly. They play a lot of man and cover 2, and he said he knows me and AJ can play man pretty well,” Nation said. “I think he would love to have all of us, but he wasn’t pushing anything on us about getting all of us. He said they don’t offer too many people, so if they offer they are going to be recruiting you hard.”

Nation has always been primarily a wide receiver, with his sophomore season is high school being his first full year as a cornerback. Nation now claims over 40 offers as a corner, and his translated ball skills from the offensive side of the ball is his biggest weapon at his new home.

Nation said that he has built a good relationship with the majority of the schools who have offered and makes it a point to stay in touch with all of those schools. With Nation’s recruitment beginning to heat up, what will a school get from Nation when he decides on a school?

“They are going to get a selfless player. I’m going to put the team first before myself,” Nation said. “If I have to go to special teams to help the team win, then I’ll go to special teams. If I have to lock down a side of the field and not get any action, I’ll do that. If I have to go to offense, I’ll do that. They’re going to get a team-first player and a dog. I’m going to go out there and give 110-percent all of the time. I might get beat a few times and might get caught on, but I know for a fact I’m going to win my battles and I’ll always bounce back and make a big play to help the team win.”

Nation is currently ranked by 247Sports as the No. 11 cornerback in the nation and the No. 110 player overall in the 247Sports rankings for the ’23 class. At 5-10, 170-pounds, Nation recorded eight interceptions in eight games during his sophomore season, which led the state of Georgia for the 2021 season. Nation is a very smooth and fluid athlete, switching his hips and running with receivers with ease. Nation’s ball skills pop on film, especially his instincts to read the play and high-point the ball before a receiver can even begin to go up and make a play.

After an amazing visit at Clemson university im beyond blessed and humbled to receive an offer from one of my dream schools CLEMSON UNIVERSITY @CUCoachReed @I_Am_OD3 pic.twitter.com/wEwPm98pHE