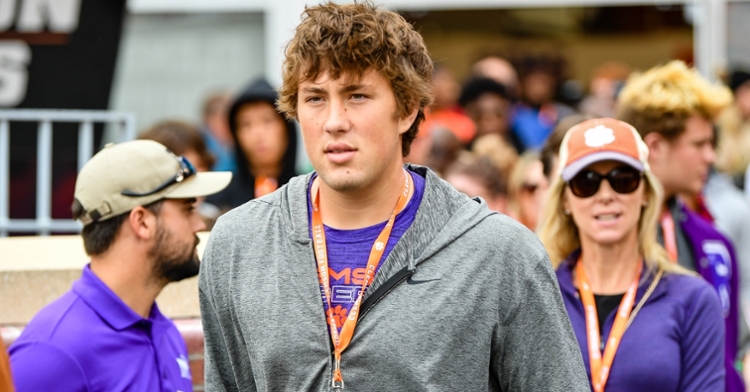 Now that the recent flurry of coaching changes across college football has seemingly come to an end, one of the top offensive linemen in the Palmetto State is set to start taking visits.

Monroe Freeling (6-6 275) is a 2023 offensive tackle prospect out of Mount Pleasant (SC) Oceanside Collegiate. Freeling has emerged as one of the top prospects in the country for the next recruiting campaign and his offer list includes the likes of Clemson, South Carolina, North Carolina, Arkansas, Georgia, Duke, Kentucky, Arizona State, Auburn, and Virginia.

Freeling and his family are from Bend, Oregon, and moved to South Carolina about six years ago. He has familiarized himself with the two in-state schools in Clemson and South Carolina. He camped at Clemson last summer and went to one game at each place last season. That being the case, he wants to spend time this month checking out programs farther from home. He will visit Miami on January 22nd.

“I think now that college football has been flipped, and coaches are in different places now, it kind of feels that it’s restarted in a way,” Freeling said. “I’m looking forward to engaging it in it more. I’ve been waiting for all these coaches to settle down and decide where they want to be for the next couple of years. Now that the majority of it is over with, I’m looking to get out there.”

As for the two in-state programs, Clemson, with its consistency at the head coaching position, has a little bit more of a comfortable feeling for Freeling at this point.

“I’ve grown more of a relationship with Clemson since South Carolina went over with the coaching changes,” Freeling said. “I’ve been in touch with both of them. I’m so close to them, I could easily get up to one of their practices in the spring. I think the other schools deserve a shot, especially since they are so far away. I don’t know a lot about the other program out there, and I know a lot about South Carolina and Clemson right now.”

Clemson is going through a change with their offensive line with coach Thomas Austin replacing the retiring Robbie Caldwell.

“I loved Coach Caldwell, but I think Coach Austin is a younger spirit and I think he’s going to do a great job,” Freeling said. “I’m excited to see where it goes and excited to develop a relationship with him. During the middle of the season, I got on a Facetime with Coach Swinney, and he was telling me the last time they lost two games beginning of a season, they ended up going 10-3. He told me that mid-season and what do you know, they ended up 10-3. I think that said a lot about how they commit to the process. They committed to the process and ended up exactly where they wanted to be despite all their injuries and setbacks.”

Freeling said Notre Dame remains a player for him, and he wants to make a visit back to the West Coast to see some of those schools.

“I’m still keeping it open because I feel like COVID set me back, and with all of these coaching changes, that’s also set me back,” Freeling said. “I’m trying to get into it though because time is coming up. I’m not trying to rush myself, but I’m trying to keep myself paced to where I’ll be making the decision without forcing anything.”

Freeling said at this point he does not have any timetable for a decision.