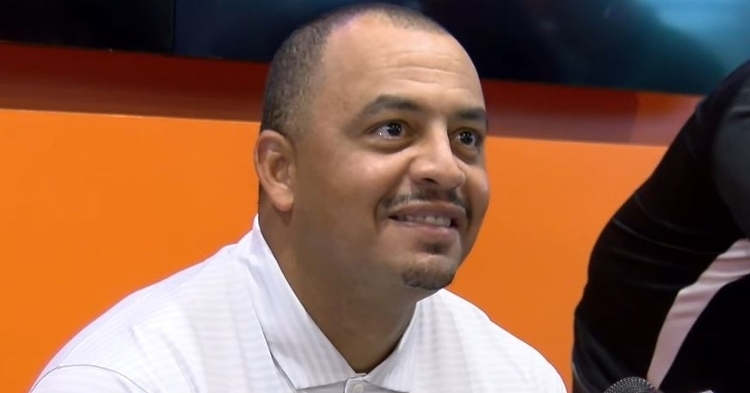 Elliott knows the offense has to improve.

CLEMSON – Tony Elliott sat down with the media Monday afternoon in the Poe Indoor Facility and answered questions about his performance, the play calling, and the overall malaise of the offense.

Clemson last season averaged 43.5 points and 500 yards per game. This season, the Tigers, including the game against an FCS opponent, have the worst offense (295.5 yards) in the ACC. Against three FBS teams, the Tigers are averaging just 10.3 points and 188.7 yards (in regulation). The Tigers are 121st in total offense, 105th in scoring offense, and 99th in rushing offense.

As he sat down at his interview session, Elliott smiled and said, “Come on. I know it’s coming.”

Elliott has come under fire for the performance of the offense, and during Monday’s interview session TigerNet asked Elliott many of the questions you, our readers, have had. It wasn’t a 1-on-1, so there were others asking questions, but we tried to make the best use of our opportunities.

What do you see as the issues with the offense, and at what point does it become, "things are what they are instead of we can fix this?"

Elliott: “The biggest thing is we are out of synch right now. It's ten guys doing the right thing and then one guy not doing the right thing. Or it's nine and it's two guys not doing the right thing. And some of that can be attributed to youth. The game speed is a little different even though the speed out here on our practice field is pretty fast. It takes time to work through those things. From a quarterback perspective, we have to do a better job upfront of making sure he gets comfortable again. I thought he made some progress in previous games of sitting in the pocket, but I thought he got a little antsy again and moved in the pocket when he didn't need to. I think it's a couple of plays, too. All it takes is a little bit of momentum. We aren't at that point of it is what it is yet, but we have to get the pieces in place and assess what each individual can do.”

The play calling has come under fire. Who calls the plays? Does Brandon Streeter help, or Coach Swinney, or do they have input? Also, the offense was called "archaic." How do you respond to that, that it's outdated?

Elliott: "Well, I call all the plays but I get input. I rely on those guys to just give me suggestions because I trust their eyes and what they've seen. They've been a part of the process. And the response that I would have to archaic, is it's the same plays that they're running at North Carolina. It's the same plays that's being run all around the country. We're just not having success, we're not executing at a high level. So there's going to be critics. It comes with the territory. We just got to do a better job of executing the plays. You execute the plays, you have success, you score points, then it's not questioned as much. So that would just be my response to that but definitely rely on all those guys to assist and just give me information throughout the course of the game to help try and find the right calls for the guys. And at the same time, too, when you're struggling, everyone wants you to go be creative and think outside the box. Well, you got to be able to execute the fundamentals first and foremost. And that's where we have to get better."

Has anyone reached out to Lyn-J Dixon, to see if he is interested in coming back?

Elliott: "Not that I'm aware of. I know he's made his decision."

There was a time early in the game where you moved Justyn Ross outside and moved Will Taylor into the slot. Has there been talking about moving Justyn back outside on a permanent basis?

Elliott:"He's (Ross) played a lot of outside receiver for us. And you've seen we've done some things to try to get him back on the outside, but not in a full-time capacity. I still believe that he gives us a good advantage in the slot as well, but going forward we'll assess everything and figure out what the best spot for these guys are. But right now we feel like we've got him where he needs to be, but then also build to where we can put them in other spots, whether it's boundary outside or whether it's the field outside."

What can you do better as a play caller

Elliott: There's a lot of things. I felt like on that second and long, I probably should have gone with a different call, even though it was an RPO. I could have put DJ in a better situation. Possibly, I can take some of that off his plate and control that a little bit more for him. Those are the things I can do better, just try and limit some of the decisions that he may have to make.”

As teams approach you differently, how much do you need to adjust what you've always done to kind of combat the adjustments guys are clearly making against you guys?

Elliott: "What we have to do is take that into consideration within each gameplan that we have, that we have an answer and a plan in case they go to what they feel like other people have been doing to be successful. But we also have to still prepare for what we see on film. So now you're going back to BC, where they are 90 percent four-down (linemen). But we have to be prepared for when they do jump in their high structure and mix it in. I don't think it's a wholesale change, but we have to make sure that each week we have a plan for whatever we see or we believe they've seen other people have done well against us."