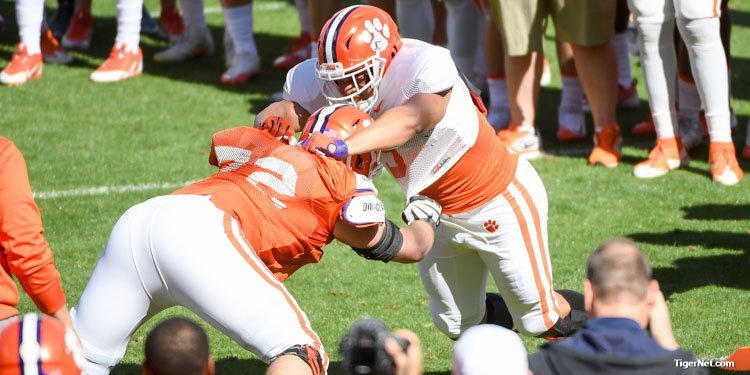 Xavier Thomas battles an offensive lineman in the PAW drill

CLEMSON – Just a few more days of fall camp and the Clemson Tigers will begin preparations for the season opener against Furman.

Furman is coming off a 2017 campaign that netted an 8-5 record and second-round appearance of the FCS playoffs under first-year head coach Clay Hendrix. Furman defeated Elon, 28-27, on the road in a first-round playoff matchup a year ago. The Tigers have won 30 in a row over Furman, a streak that started in 1938.

Clemson scrimmaged inside Death Valley Thursday, and head coach Dabo Swinney said he is pleased with his team’s installation on both sides of the ball.

“Oh yeah, we got a lot in. Right now, we have this in (holding arms about three feet apart). We aren't going to play Furman with that,” Swinney said. “We are preparing for the season as we go through. Offensively and defensively we have put a lot in. But I love where we are installation-wise. We will sprinkle in a few little things, but come Tuesday we are going to turn the page and we will be all Furman prep from that standpoint.

“We will still have some good-on-good to stay sharp and keep up with the speed of the game, but we will turn the page to all opponent prep. So now your gameplan gets locked in (holding hands foot-and-a-half apart) because everything you have doesn't apply from week to week based on who you are playing and what their personnel is and their scheme. The type of front that they play and their coverage, so then you take all of your installation and craft a game plan for that week.”

Swinney said he has also been impressed with his team’s retention.

“I think what we've been able to expose them to has been very good. And then what they've been able to absorb is probably what I have maybe been most impressed with,” Swinney said. “I have got a lot of veteran guys back so obviously, we are at a pretty high level with those guys. They have played a lot of ball.”

The younger players, however, are punch drunk.

“Even the young guys I think have held their own, but they are all kind of punch drunk now a little bit. We are starting our third week, and yesterday was the culmination of two weeks of camp,” Swinney said. “Every day. Meetings, practice, meetings, practice, just every day. So this is literally the start of the third week today, because we started two weeks ago on Wednesday. There has been a lot going on.”

Swinney has changed up his camp schedule and will give his team the weekend off, a rarity in fall camp.

“I think Friday will be awesome. We came through today healthy,” he said. “We have meetings tonight and dinner tonight and we will have a couple of hours of meetings to clean up the tape and then back over here Friday for special teams and segment meetings, and then Friday will be more of a mental practice. Slow it down. No pads or anything like that. And then we are going to give them off Saturday and Sunday.

“The first time in my 29 years of college football that I will be twiddling my thumbs on Saturday and Sunday. But they (NCAA) changed the practices from 29 to 25, and the way we did our schedule - and I could have brought them in later - is we went 17 straight days and now we are going to take Saturday and Sunday. And when we get back in here Monday morning these guys are going to be bouncing. Light on their feet a little bit. A good opportunity for them to recover both mentally and physically and get back after it with a strong finish Monday and Tuesday. They start class on Wednesday and we will have a good practice Thursday and the Beanie Bowl next Friday and get into game week.”