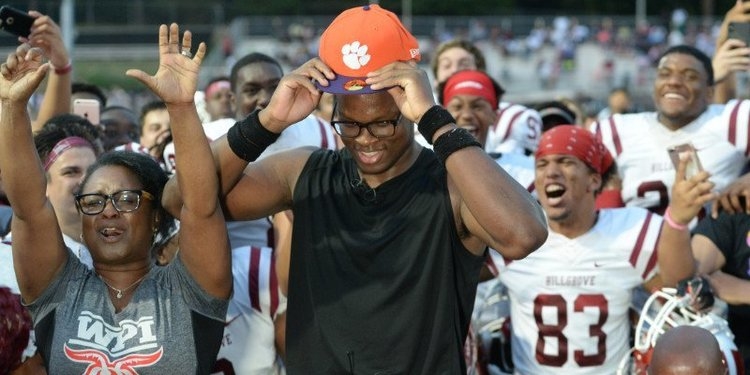 POWDER SPRINGS, GA – Myles Murphy had to go with his gut feeling, and his gut said Clemson is where he’s supposed to be.

Murphy played the first half of the game but took off his pads and helmet for his announcement, where he said he would attend Clemson and major in engineering. Murphy told TigerNet that both of his finalists – Clemson and Auburn – checked off all the boxes.

“Both Auburn and Clemson checked the boxes of the culture that they adopt there, the people that they develop there. They develop their players into men, not just football players, but men,” Murphy said. ”To single them out, I just had to go with a gut feeling, and I chose Clemson.”

Murphy is the 15th commitment of the Tigers’ 2020 historic recruiting class – a class he says will be the best ever – and the fifth consecutive 5-star to commit to the Tigers over the last several weeks. At Clemson, he will play for defensive ends coach Lemanski Hall.

“Coach Hall is very important. He is my position coach,” Murphy said. “I am going to be spending most of my time with him. He is somewhat fairly new to the coaching system, but I put my trust in him, and I know that he knows what he is doing.”

Murphy made a final trip to Clemson to check out the academic side of things.

“Clemson was at the top of my list before I went. I never went to the engineering facilities,” he said. “I just wanted to check if everything was like I wanted and it was good. My brother is studying engineering, and I’ve always been interested in it. Once I visited and checked out everything, I knew Clemson was where I wanted to go.”

“The culture Dabo Swinney has adopted, he’s never really offered a JUCO player so that says a lot about his school. Just going from there it is just a great school,” Murphy said. “I also wanted to go somewhere where I could play in a 4-3. I like the way Clemson plays their ends – they are rushing and then dropping back into coverage, also.”

Murphy called head coach Dabo Swinney on the first night of the NFL Draft to let him know his decision.

“I called Coach Swinney, and he was at the draft, and Clelin Ferrell had just been drafted,” he said. “At first I was talking to him in a monotone, but then I told him it was time I became a Tiger. He was excited and said he was with Christian Wilkins and even put him on the phone. It was exciting.”