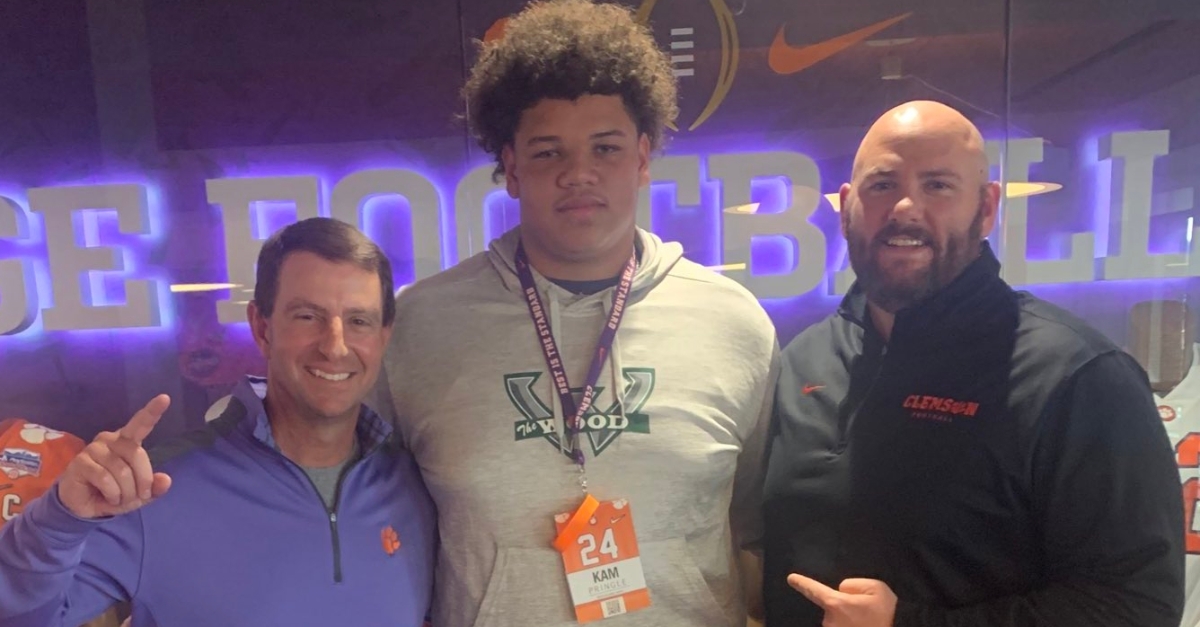 Kam Pringle took in the win over the Wolfpack.

One of the Tigers’ top offensive line targets for the 2024 recruiting cycle was in Clemson last weekend to take in the big victory over the Wolfpack.

Kam Pringle is a 4-star out of Dorchester (SC) Woodland who has offers from most of the major players, and he continued his travels last Saturday, driving up to Clemson for the top-ten showdown with NC State. Pringle is a key target of the Tigers.

Last weekend’s visit was the second time Pringle has been to Clemson for a game, his first one at night at Death Valley. He said the experience this time was as different as night and day.

“Really, just the atmosphere,” Pringle said. “That was my second time there for a game. Last time I went up there was like a 12:00 PM game against Wake Forest. It wasn’t too crazy. But with College Game Day, night game, new lights, everybody is in the stadium, it was a different animal. Experiencing that firsthand was really good, definitely a star next to Clemson’s name for me.”

Pringle was a late arrival to the stadium, so that limited his access to the Clemson coaches. He did not talk with head coach Dabo Swinney, though Swinney made up for that with a phone call Sunday night. He did get a few minutes with offensive line coach Thomas Austin.

As for the impact of the visit on his recruiting, Pringle said it was another step forward for the Tigers.

“With that visit, of course, it’s another plus for me. I really enjoyed it,” Pringle said. “It really bumps Clemson up a spot as one of the top contenders for my recruitment.”

This season Pringle has also been to games at South Carolina and Tennessee. He might visit Virginia this Saturday and wants to get to games at Georgia, Florida and NC State. He could also make return visits to Clemson and South Carolina.

Pringle has a top ten right now of South Carolina, Clemson, Virginia, NC State, Tennessee, Georgia, Florida, Ohio State, Auburn and LSU. He plans to cut the list to eight after the season and then to five. From that final five, he will make his commitment call sometime in 2023.