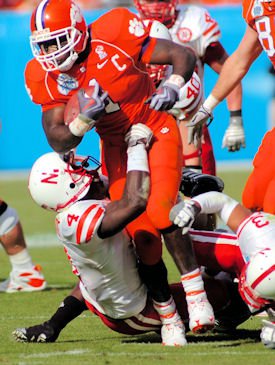 Davis finished his career as Clemson’s all-time leader in rushing touchdowns and was second in rushing yards and total touchdowns.

Clemson, SC—Former Clemson record setting football players James Davis, Michael Hamlin and Cullen Harper will all play for the South team in the Under Armour Senior Bowl on Saturday night. The contest will be held in Mobile, AL and will kickoff at 7:00 PM Eastern time. The game will be televised by the NFL Network. This will be the most Clemson players in the Senior Bowl, which is in its 60th year.

Davis finished his career as Clemson’s all-time leader in rushing touchdowns and was second in rushing yards and total touchdowns. He was Clemson’s top rusher each of the last four years, the only Clemson players in history to do that. He had 751 yards rushing this year. He also finished second in school history in 100-yard rushing games.

Hamlin finished his four years at Clemson ranked second in takeaways with 18. He had 14 interceptions and four fumble recoveries. Only College Football Hall of Fame player Terry Kinard had more takeaways than Hamlin with 19. Hamlin ranked second on the 2008 team in tackles with 110 and had six interceptions to rank 10th in the nation.