Brandon Thompson
Sr. Defensive Tackle
#98 6-2, 310
Thomasville, GA
View Full Profile were all drafted by the National Football League on Friday night. Branch was taken in the second round by the Jacksonville Jaguars, Allen by the Indianapolis Colts and Thompson by the Cincinnati Bengals.

All three were taken within the first 100 selections of the NFL draft, the second straight year Clemson has had three top 100 picks, but just the second time since 1993. Being a top 100 selection is a good sign for these three Tigers, as 53 of the last 56 Clemson players taken within the first 100 picks of the draft have gone on to play in the NFL. One of the players who has not, is Jarvis Jenkins 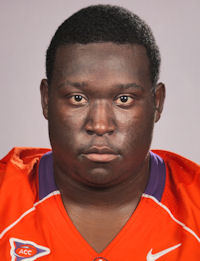 Jarvis Jenkins
Sr. Defensive Tackle
#99 6-4, 315
Clemson, SC
View Full Profile , a rookie last year with Washington who was injured in the preseason and has not had an opportunity to play yet.

Levon Kirkland
Linebacker
# 0, 0
,
View Full Profile was the 38th pick by the Pittsburgh Steelers on April 26, 1992. He is the highest drafted Tiger since C.J. Spiller

Allen was the first pick of the third round by the Indianapolis Colts, the 64th overall pick of the draft. Allen, who was the winner of the John Mackey Award as the top tight end in the nation this past year, will join number-one draft pick Andrew Luck of Stanford, and tight end Coby Fleener of Stanford on the Colts team. Fleener and Allen were both finalists for the Mackey Award this past year.

Kavell Conner
Running Back
# 6-1, 200
Midlothian, VA
View Full Profile on the Colts team this coming year. Conner, a seventh round pick in 2010, led the Colts in tackles last year.

Thompson was the 93rd overall pick of the draft by the Cincinnati Bengals. The second-team All-ACC performer at defensive tackle is the first Clemson player taken by the Bengals since 1999 when Donald Broomfield was taken in the seventh round.

With the selection of Branch and Thompson, Clemson’s 2010 defense that ranked in the top 10 in the nation in total defense has had six players drafted.