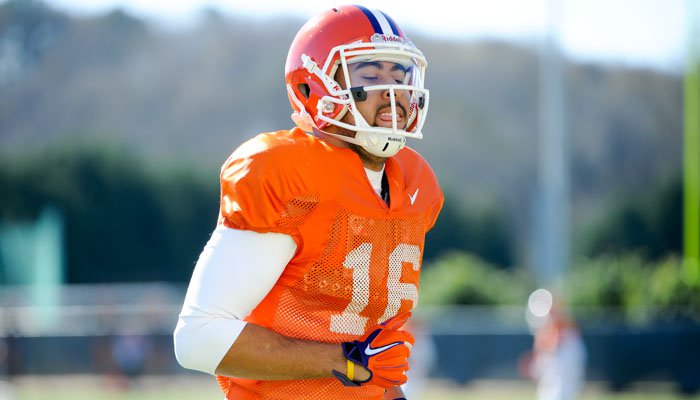 The Tigers are hopeful Jordan Leggett will be able to play against Oklahoma.

Clemson’s football team practiced under sunny skies early Wednesday afternoon in Orlando’s Citrus Bowl, and Cooper was the lone scholarship tight end - Rod Byers is listed as a tight end/fullback - able to participate in the two-hour workout. As a result, he was making sure that new offensive coordinators Tony Elliott

Jordan Leggett
So. Tight End
#16 6-5, 251
Navarre, FL
View Full Profile is also battling the injury bug, and while he was dressed out Wednesday he didn’t participate in the practice.

“We're a little thin right now. Obviously the year has been tough but injuries are a part of the game and we feel like it's the same song but different time,” Cooper told the media after the practice. “We've been here before and we always have a good plan”

He is also trying to get a few passes thrown his way.

“There is a little lobbying, I'm not going to lie,” Cooper said with a big smile. “We'll see if it worked, but at the end of the day it's just about getting a team win. We're excited.”

Offensive coordinator Tony Elliott said that he hopes Leggett will be able to play against Oklahoma, but also said that converted defensive tackle Roderick Byers

“Obviously, you have to have a plan in place but we're very hopeful that Leggett will be able to get back and give us snaps,” Elliott said after the practice. “It's a concern but we've got a plan in place. “We've been pushing him [Byers] hard to be able to function in the majority of the situations. Those guys have to know a lot and are responsible for a lot. We are pushing him to get him ready to be able to play. We're a little bit thin, so it's really just Sam and Byers and hopefully Leggett will be back by the end of the week.”

“We kind of pushed him (Leggett) a little today to see where he is. We'll know a little more tomorrow when we put the pads on,” Swinney said. “We're hopeful but we don't know right now. It's too early in the week. Today is like a Monday practice for us so we've still got a few days before we make that decision.”

Swinney was asked if he was worried about the position heading into next season, and he said no.

“We're going to be great at tight end. Hopefully we'll get Jay Jay back if he can do what he needs to do. [D.J.] Greenlee was making a lot of progress for us. Physically he's going to keep developing. He's out. We've got to get him healthy. We've got to get Seckinger healthy so the biggest thing in fixing it is we've got to get guys healthy. It's been that way all year. Leggett has been hurt. He's been in and out and inconsistent as far as his ability to be on the field this year. We've got two outstanding young prospects in Milan Richard

“We've got another signee [Garrett Williams] that will be coming in to join the group that we're really excited about. We'll be fine at that position. It's just been that type of year and it started in the first game with Coop in warmups and it's been that way. It's been everybody's turn all year long. We just haven't had the continuity there, kind of like our offensive line. We'll be a very, very good tight end group around here for a long time.

“He's just got some things that he's got to satisfy. The biggest thing is getting back to school and re-evaluating where he's at and we'll go from there.”

“We had a couple of walk-on guys that were ineligible during the season for whatever reason, but all of the guys that have been playing and traveling are here. I'm really proud of our guys. They all showed up. We had a team meeting at 7:45 last night and every single one them were there early or on time with the exception of Kellen Jones

Kellen Jones
RS Jr. Linebacker
#52 6-1, 233
Houston, TX
View Full Profile . He had a plane cancellation coming out of Texas so he got here a little bit later, but everybody else was here. I was really pleased with that.”

Boulware to start at MIKE?

Ben Boulware
So. Outside Linebacker
#10 5-11, 235
Anderson, SC
View Full Profile – who has practiced predominantly at the WILL linebacker spot, is in line to get the start for MIKE linebacker Stephone Anthony

Stephone Anthony
Sr. Linebacker
#42 6-2, 244
Polkton, NC
View Full Profile who will have to miss the first half of the bowl game after a targeting penalty in the South Carolina game.