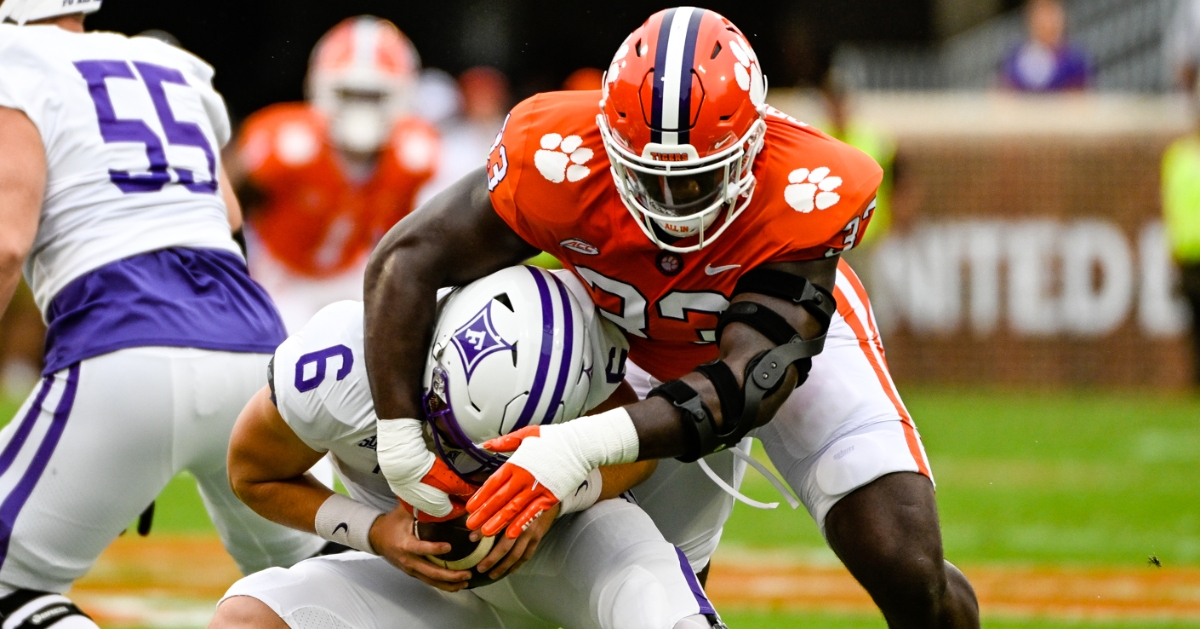 CLEMSON – Ruke Orhorhoro was born in Nigeria, spent a little less than a decade in England, and moved to Michigan when he was 9. When he was 17, he left Michigan for a little place that sits in the foothills of South Carolina called Clemson. He is well-traveled, well-spoken, and he wants you to know he is the best basketball player on his team.

Orhorhoro is one of the Tigers’ best defensive tackles, and his talents have already drawn the interest of NFL scouts. He enters this week’s game against Louisiana Tech with 52 career tackles (four sacks) over 29 career games. That includes the nine starts he has made as both Tyler Davis and Bryan Bresee have missed time the last few seasons with injury.

The fact that Orhorhoro is such a good player becomes even more impressive when you realize that he didn’t play football until his junior year of high school, and he only started playing as a way to fill time during the offseason.

“I always wanted to play football my whole life, but I always played basketball because I was just really good at it,” Orhorhoro said Monday. “And we went to the state championship, like, pretty much the whole time I was at River Rouge (High School in Michigan). And so just after that, I just hated sitting down for so long after basketball season, so I just wanted to find something else to do to keep me occupied. And so Corey Parker, my football coach, came to me and was like, ‘Hey, you want to try football? We need to get you out there.’ And it took me four positions to get the defensive line, and so I'm just glad it worked out the way it worked out.”

Orhorhoro said he started at wide receiver but didn’t like to block. They moved him to tight end, and he realized that required even more blocking. So the coaches moved him to linebacker, and he didn’t like having to cover and roam all over the field. Then he found his calling.

“He (Parker) just said, ‘Go ahead, put your hand in the dirt.’ And I've loved it ever since then,” Orhorhoro said.

Head coach Dabo Swinney has said that when Orhorhoro arrived at Clemson, he didn’t even know how or where to line up. He was forced to go against players like John Simpson and Jackson Carman every day – both are now in the NFL – and those two created nightmares that Orhorhoro has worked hard to forget.

“I played defensive end, so I just stood up. I was in two-point stance. I didn't know nothing,” Orhorhoro said. “I just knew how to get to the quarterback. And then when I got here, Jordan (Williams) and Nyles (Pinckney) were hurt. “So it was me and TD (Tyler Davis) that first day and they moved my position and that's when I was like, ‘I'm really playing football now and going against guys like John Simpson and Jackson Carman.’ That just took my game to a whole other level and that's when I started taking my body serious, on what I put in my body and what I ate and how I slept and stuff like that. So yeah, they taught me a lot. Shout out to them.

“But it was tough, man. I was 17 when I came to college and I don't know if you've seen John Simpson and Jackson Carman on one side. They’re humongous. I don't even want to talk about it. I got taught a couple of lessons and that just made me a better player. I wouldn't take it back for anything.”

Orhorhoro said his travels have made him appreciate the broader world.

“I left Nigeria when I was like two, and we moved to England. I was in England with my parents and then I left England when I was nine,” he said. “And so I remember a good amount of stuff like that. I just cherish life along the way because it gives me a better outlook on life. There’s so much more to see out there. And I'm just making it one of my goals that when I'm done playing football, to travel a lot.”

And that experience has also given him perspective.

“It changes a lot. Just different cultures and the different way of life,” Orhorhoro said. “And you're grateful for what you have because being in a place like Nigeria, it's a good place but it's tough and just cherishing little things. It just gives me a bigger perspective.”

His mother died when he was six and his father moved the family to Michigan a few years later. But Orhorhoro says that Nigerians are all about family, something that he leaned on during his travels and after the death of his mother, and he found a home in Clemson, another place that cherishes family.

“Being so far from Michigan, it doesn't even feel like it because I have guys on my team that I feel like I've known them my whole life,” he said. “And that's what makes it so much easier because I'll give them my all, give my all for the guy next to me, and I know 100% they'll give me their all, too. And so it's just such a tight knit family and that's what made me come here.”

Basketball was his first love, and he says he’s the best player on his team.

“Yeah, I mean, basketball, I could run for days. That's why I loved that I played basketball. When I did football conditioning, it was so easy because that's all I did was run,” Orhorhoro said. “But just the physicality, man, it's so much different. You're getting hit every play. Like I said, the closer you are to the ball, the more important you are. So, I feel important. So that's why I didn't mind them moving me from defensive end to tackle, because I guess I'm more important.”

However, he still believes he is the best basketball player on the team – he says his teammates compare him to LeBron James – and his teammates are always challenging him.

“Everybody always wants a shot at the best, so everybody calls me out, and we just recently built a basketball court, so if we have time, we can go in there,” Orhorhoro said. “But, yeah, they called me out a lot in the summer. I just have to show them that I'm the best basketball player on the team still and will always be. No, nobody's close to me. Yeah, they just put me on that court.

"Some people compare me to LeBron James, but I don't want to,” Orhorhoro added with a smile.

His teammates, however, don’t always agree that his basketball talents are the best on the team.

Quarterback DJ Uiagalelei was a little more complimentary, saying that Orhorhoro is a “baller” but is also a bully in the post. Cornerback Malcolm Greene laughed when asked about the LeBron comparison.

“I’ve seen him play, and nobody compares him to LeBron James,” Greene said. “But every time Ruke shoots he yells, ‘Kobe’ because he just jacks and is shooting from anywhere. And he usually doesn’t make it.”

Football is the new love

Orhorhoro said he grasped the mental side of football faster than he did the physical side.

“It took me a little. I mean, mentally, I was there. It wasn't long to learn the plays, but it's just that physicality. You would think it's no different, but when your hand is really in the dirt constantly, it's just constant physicality and blocking and shedding. And just having guys like Tyler Davis next to me, he's a football genius, and he taught me everything he knew. And so we push each other and we just try to keep learning and learning.”

His love of football started when he was in England and has only grown in Clemson.

"It's grown so much. I always would watch it, even in England. I didn't understand it, but I just liked it. And my mom was always scared that I was going to get hurt playing it, but I just told her I'm good," he said. "And so it's grown so much, and especially being in an environment like this, that I'm just so passionate about everything that I do."