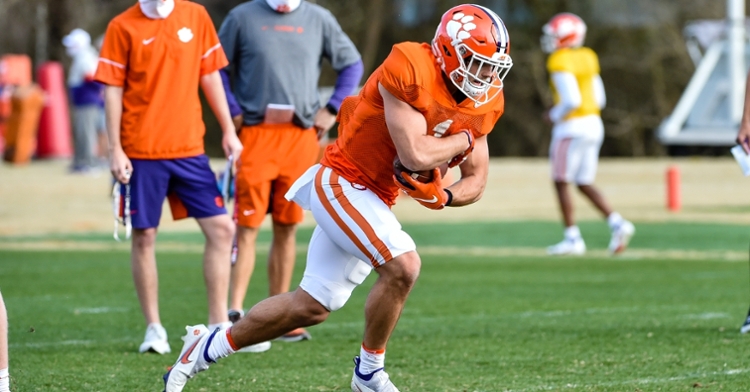 Most freshmen running backs don’t look the part. Not right away. There is weight to be gained, muscles to be sculpted and shoulders to be broadened. Not Phil Mafah and Will Shipley. They looked the part the second they stepped on campus.

Mafah and Shipley have raised more than a few eyebrows with their performances during the first part of spring practice. Mafah looks like a fire hydrant with speed, while Shipley looks like he’s been in the weight room since he popped out of the womb.

"Pretty much both of the freshman (running backs), Phil and Will," Dixon said. "They're coming out and matching what we have, those guys were working. Even though they were tired, they were picking it up and pushing it. So that showed me something about those guys, that they're gonna be pretty good in a couple of years."

“They are both natural players. They were both incredibly well coached in high school. They are coming from systems where they were asked to do similar things,” Swinney said. “So, I am really excited about both of those guys. They are way ahead of the curve.” “Then today in our work, Phil Mafah, he flashed," Elliot said. "I think everybody's like, 'Man, that's a big guy,' but everything has been controlled. Today we kind of got out the way and let him play man, and he popped a big long run, and you saw that that explosion that he has. You know and Shipley, every time we see that cat -- man, he's flying around 100 miles an hour. So the best thing is that there's competition there."

While Elliott mentioned Mafah, quarterback DJ Uiagalelei is a big fan of Shipley.

"Another guy I'd probably say on the offensive side is Will Shipley," Uiagalelei said. "During all the mat drills, all of practice and stuff he just looks real great out here. He's a really fast running back and you can just tell he has that mindset to him where he just wants to come out and compete. You can just tell he's really locked in and really focused."