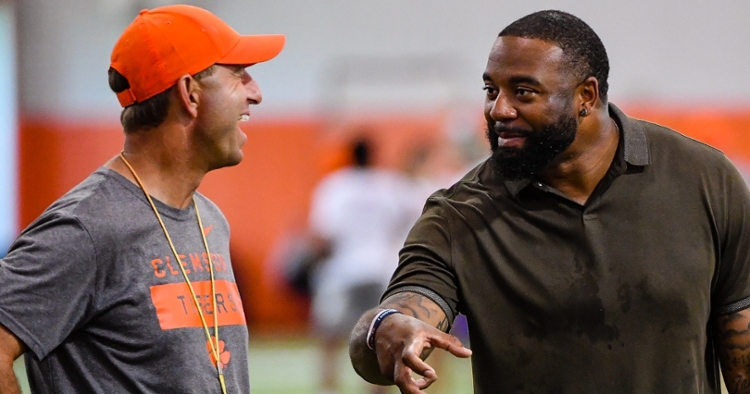 Boyd talks to Swinney during the high school camp in June.

Tajh Boyd stopped to talk with me during a session of Dabo Swinney’s high school camp in June, and we spent the next hour breaking down the mechanics of the quarterbacks we were watching. I thought then that Boyd needed to be a coach and that has become reality as Boyd has been added to head coach Dabo Swinney’s support staff.

Boyd is a Clemson legend and is seen by many as the foundation piece for the current success of the program. He was a part of Swinney’s first recruiting class and set several records during a sterling career.

Boyd finished his career as one of the most prolific passers in Clemson history, setting school and conference records with 11,904 passing yards and 107 touchdowns. In addition to leading the Tigers to an ACC Championship title in 2011, Boyd earned First Team All-ACC Honors in 2011 and 2012 and was named a First Team All-Ameican in 2012. As a three year starter, Boyd lead the Tigers to three consecutive 10-win seasons, including victories over No. 9 LSU in the Chick Fil-A Bowl and No.7 Ohio State in the Orange Bowl.

Swinney offered Boyd the chance to once again make his mark on the program.

"It'll fit somewhere between (an) analyst (and a) player development role," Boyd told WACH in Columbia. "I've been through so much with this game: loved it, hated it and everything else in-between. The fact that I get to give that back; help guys navigate through those experiences and get to relearn the game in a different light is really exciting for me going forward."

Boyd said Swinney reached out to him about six weeks ago with the offer, but it wasn’t the first time he had been offered a spot.

“Honestly, I had no interest in that," Boyd said. "I wanted to separate myself from the game for a little while now. Maybe it was because I lived in the Upstate and football is so big in this state and I thought my identity was wrapped up in that space too. For me, I had to prove something to myself that I was more than that - that I could do more than that. I've proved that to myself.

"For a while now, I've been trying to find something to commit to; something to be a part of and I think this is that... Me and coach Swinney talked about it and (Swinney said), 'We talked about this idea of you coming back and getting back into the game and quite frankly I don't know if you would've been ready for it. But I know that you're ready for it now.'"

Now, he gets the chance to take part in the game he loves.

"I'm just gonna relearn the game. Maybe I'll start in the (offensive) line room and relearn protections and then I'll jump in with the receivers and tight ends and try to get a holistic version of what it looks like to coach on the other side of it, which means preparation and long hours but I'm excited about it,” Boyd said.

Doing it in Clemson makes it even more special.

"The people have become home for me. It's something I've been searching for my whole life,” he said. “We moved around so much when I was growing up that I never had that one stable place and these people have been that for me. They've been a saving grace whether they know it or not. I'm so grateful and the fact that I have a chance to give that back again and serve in this role is exciting for me."